Are y’all ready to put a little twang in your Christmas? 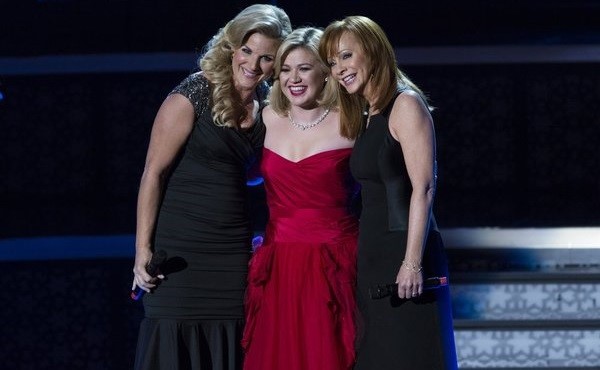 To help celebrate the release of her Christmas album Wrapped in Red, Kelly Clarkson has a very cool special for us tonight. Kelly Clarkson’s Cautionary Christmas Tale has pulled in the big guns of country music to put on a very special and very comical musical with a traditional Christmas morality tale. Those musical big guns include The Voice‘s (and Miranda Lambert’s) Blake Shelton, the legendary and always funny Reba McEntire and country superstar Trisha Yearwood. However, they’re not the only familiar faces you’ll see.

Clarkson is also pulling in a host of acting talent for her big event, too. Everyone from Community‘s Kim Jong to William Shatner will be on hand to help Clarkson weave her wondrous tale. Even Whoopi Goldberg and the hilarious Robin Williams are stopping by. Have we name-dropped enough funny people to spike your interest?

NBC recently released this behind-the-scenes video of Clarkson and pals preparing to shoot their first scene. If it’s any indication, the musical is sure to be funny.

Did Kelly really just say she likes to play a b****? It sounded like it! While we’ll never tire of her sweetness, we are now officially eager to see Clarkson tear it up as, well, a grinch.

The musical will tie in with her new Christmas album by featuring songs off the release. The album features an array of our favorite Christmas classics like “White Christmas” and “Silent Night.” However, it also features several Kelly Clarkson originals, including the album’s namesake, “Wrapped in Red.”