Gisele Bündchen’s breastfeeding photo is either a thing of beauty or a slap in the face, depending on who you ask! 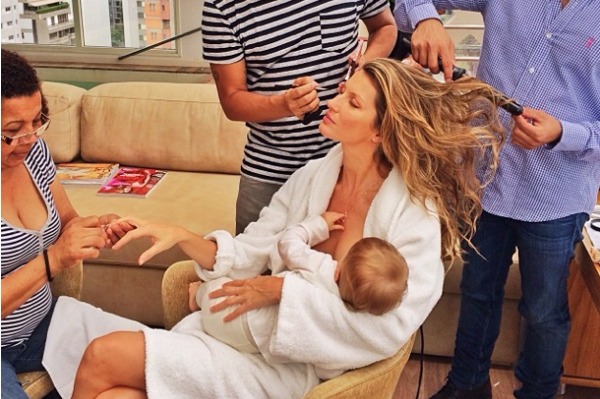 Gisele Bündchen‘s pro-breastfeeding stance ought to be admirable, but the way this supermodel mother goes about supporting causes close to her heart never fails to ruffle feathers.

After Bündchen posted the photo seen here to Instagram on Tuesday, women far and wide spoke out in reaction. Turns out the ability to find beauty in breastfeeding photos is relative to the eye of the beholder.

“I applaud @giseleofficial for posting her pic of herself breastfeeding her daughter it’s 2013 this still shouldn’t be an issue,” one person tweeted, applauding the wife of Tom Brady’s daring move to promote breastfeeding in such a public way.

A second person added, “Gisele’s new photo is awesome… She proves you can still be fabulous while being a breastfeeding momma! Love it!”

Victoria’s Secret Fashion Show: Angels from the ’90s to now >>

However, there are others who aren’t as ready to speak out in support of the opinionated model’s latest move.

“Mixed emotions on this,” one dissenter wrote Wednesday. “Love that she’s an advocate for breastfeeding. Hate that she makes the rest of us look bad!”

Another, getting to the heart of how it appears Bündchen is flaunting her ability to nurse 1-year-old Vivian Brady, tweeted, “Breastfeeding is great, but in the past yr 2 of my friends had kids and couldn’t. Gisele is an idiot.”

Indeed, those who struggle to breastfeed or have chosen not to likely haven’t forgotten what this particular celebrity mom opined in 2010.

Speaking to Harper’s Bazaar UK she explained, “Some people here think they don’t have to breastfeed, and I think, ‘Are you going to give chemical food to your child, when they are so little?’ There should be a worldwide law, in my opinion, that mothers should breastfeed their babies for six months.”

Though she later apologized and asserted she’s “not here to judge,” this latest Instagram photo makes it clear Bündchen is willing to publicly display her choice to breastfeed in order to continue to support the cause.

Tell us: Is Gisele Bündchen’s breastfeeding photo commendable or just too much?