Mila Kunis and Ashton Kutcher shared a rare moment of PDA by posting a photo of themselves kissing. 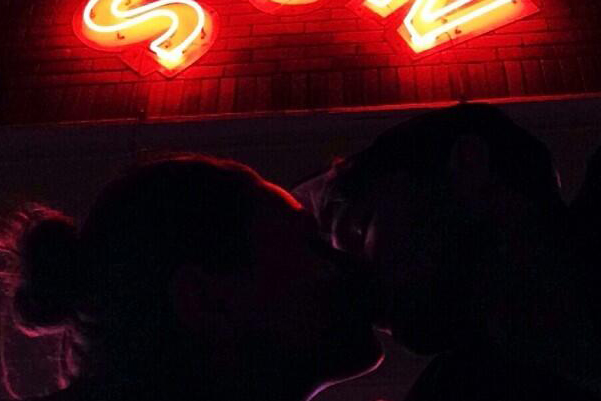 Known for their privacy, Mila Kunis and Ashton Kutcher caught fans by surprise when they posted an Instagram photo of themselves on Tuesday that shows them getting cozy and kissing in public.

Is a baby or marriage next for Ashton Kutcher & Mila Kunis? >>

The cute picture features Kunis and Kutcher locking lips in front of the Sun Records building in Memphis, Tennessee. The pair stands in the dark, underneath a bright neon sign that reads “SUN,” which makes them appear like silhouettes. You can barely make out their profiles, but Kunis’ sloppy bun is clearly visible, while the side of Kutcher’s face can barely be made out.

Seems like the famous couple is finally able to focus on their romance now that Kutcher’s divorce from Demi Moore has been finalized after such a long wait. The Two and a Half Men star and his ex-wife announced their split two years ago, but divorce proceedings dragged on due to monetary issues.

Kutcher’s divorce also sparked rumors that he and Kunis would be getting engaged soon once he was free and clear to get married again. The 35-year-old actor and his former That ’70s Show co-star are getting serious and have spent a lot of time with her family lately. Just last week, the pair attended the wedding of Kunis’ brother in St. Petersburg, Florida, together.

“Ashton was welcomed by Mila’s family,” an attendee at the wedding told Us Weekly. “They seemed very comfortable together. He watched the ceremony from the front row and never took his eyes off of Mila.”

Apparently, Kutcher was even asked to pose for the family wedding photos at the altar with Kunis. The happy couple stood close to each other smiling wide for the camera and having fun as they struck some goofy poses as well, the Us source added.