It was SYTYCD‘s first wedding! Former contestants tWitch and Allison Holker make it official with a walk down the aisle. 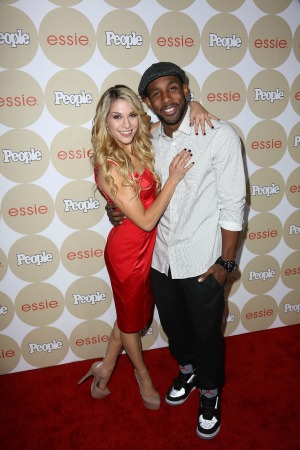 On Tuesday night, two former contestants on So You Think You Can Dance danced their way to “I do.” Stephen “tWitch” Boss and Allison Holker exchanged vows at SYTYCD judge Nigel Lythgoe‘s winery in Paso Robles, California.

According to E! News, the bride wore a strapless ivory gown designed by Watters Hollywood. The dress was embellished with silk organza flowers and leaves on a beaded lace bodice. The groom looked dapper in his Stitched Las Vegas black tuxedo accented with a plum polka-dot bow tie from the Tie Bar.

Nigel Lythgoe knows he can dance >>

There were many familiar faces from the Fox dance show in the wedding party. Groomsmen Will Wingfield, Season 4 winner Joshua Allen and female hip-hop extraordinaire Comfort Fedoke joined the Boss’ side. The bridesmaids included dancers Courtney Galiano and Kathryn McCormick as well as choreographers Travis Wall and Teddy Forance as her “bridesmen.”

At the reception, there was plenty of dancing to be had. The newlyweds danced to Adele’s “One and Only” and then hit the floor with their own hip-hop routine to Justin Bieber’s “Somebody to Love.” It was a special moment because the number was choreographed by Holker’s 5-year-old daughter Weslie from a previous relationship.

The couple got engaged in January on the set of a Microsoft commercial they were both working on. They dated two and a half years before walking down the aisle after meeting at the Season 7 wrap party.

Holker shared the first photo with her fans on Instagram and WhoSay with the caption, “ITS OFFICIAL: IM. ——MRS. BOSS——– we got married!”

ITS OFFICIAL: IM. ——MRS. BOSS——– we got married! @official_tWitch