Will Ferrell has launched a genius marketing campaign for Anchorman 2 that is taking Ron Burgundy to all the corners of North America. Here are just a few of our favorite Burgundy promos. 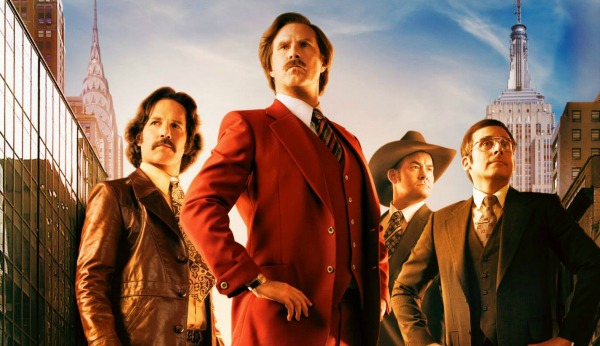 Ron Burgundy sits down with legendary Denver Broncos quarterback Peyton Manning and asks the question everyone is dying to know — how does Manning manage to be a great quarterback without a mustache? Burgundy asks other burning questions like, “Have you ever yelled biscuits and gravy” (at the line of scrimmage) and what is Manning’s relationship with the Broncos’ mascot?

December is Will Ferrell appreciation month >>

If you’ve been watching the trailers for Anchorman 2: The Legend Continues, you know that Burgundy doesn’t shy away from politically incorrect topics, and his support of controversial Toronto Mayor — Rob Ford — is just another shining example of this. Burgundy stopped by Conan to perform Ford’s campaign song — Loverboy’s “Working for the Weekend.” And yes, the jazz flute does make an appearance.

Anchorman 2 SuperTicket: Does that come with Sex Panther? >>

Burgundy pulled into sunny Bismarck, North Dakota, to assist Amber Schatz with the evening news, where he proceeded to hit on Schatz, make inappropriate comments and deliver pieces of outdated and incorrect trivia. We have to hand it to Schatz. She does a pretty good job of holding it together despite the constant distraction of Burgundy and his mustache.

On Dec. 5, Burgundy dropped by DirecTV’s The Dan Patrick Show where he shared with Dan and the gang memories of his father, Claude Burgundy. It seems dear old Dad did “untelevised” newscasts from the local bar, where Burgundy Jr. fondly remembers that his dad would just read the news out loud, to one person in particular. Burgundy goes on to describe some of his other idols and says Walter Cronkite was the guy to party with back in the day.

Burgundy joins Canadian TNS for a rousing round of curling. Here we learn Burgundy’s middle name, watch his debut attempt at curling and listen to him say, “Keep it classy Winnipeg.” Stay tuned to learn what Burgundy says is the Latin translation of Winnipeg.

It’s so hard to pick a favorite promo, especially when you factor in Burgundy’s Dodge commercials and his appearance on Saturday Night Live to sing “Afternoon Delight” — but we have to say that his voice-over of Robin Thicke’s “Ride Like the Wind” had us giggling until we had tears in our eyes. “Feel that draft up your skirts, ladies? That’s me. OK, that was creepy.”