Mike Peterson returns to help the team after Centipede rears its ugly head with a new crop of super-soldiers. But it turns out that it’s Coulson they want in the episode titled “The Bridge.” 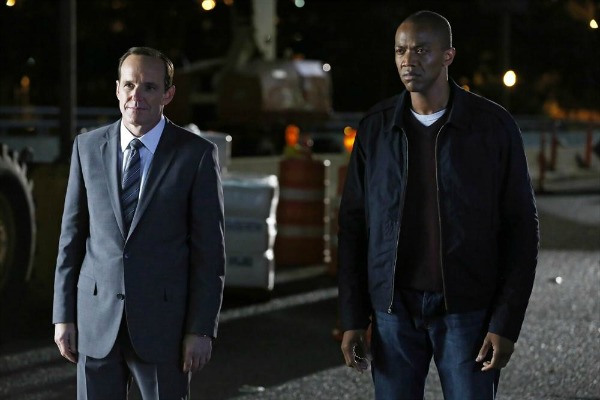 When Ward shot Mike Peterson in Union Station and saved the man’s life before he exploded like all of the other super-soldiers before him, there was little doubt that we’d see him again. All it took was a bunch of Centipede super-soldiers to break a major bad guy out of prison and Peterson was suddenly working with the team.

As much as I like Mike, though, I don’t know how I feel about him becoming a permanent part of the group — though I didn’t necessarily want the poor guy to die either. I’m hopeful that the explosion that seemed to take his life was just a ploy — like the one that also seemed to take Coulson’s life.

Underneath Mike’s story, there was a lot of other drama in this episode as well. Now that we know about Ward and May’s little hanky-panky, it’s already starting to get annoying — and I don’t necessarily just mean for me.

First, Ward tried to get fresh with May while they were training on the plane and she had to tell him to knock it off. Not that I blame him for trying to get some nookie, but he had to know May wasn’t going to go for that. Then he seemed to be protective when they were in a fight and she didn’t like that one bit.

It’s this type of thing that I said I wasn’t looking forward to in my review of the last episode and here it is happening already. When it was just them knocking boots to let off a little steam, that wasn’t so bad, but it looks like he’s starting to care and I hate that May keeps snapping at him for it.

Yes, I still want Ward and Skye together. Shoot me.

Speaking of Skye, her search for her mother didn’t get very far this week, but it did give me one more reason to not like May very much in this episode. Maybe Skye didn’t pick the best time to talk about it, but was that any reason to snap at the poor girl and make her cry?

Usually, that kind of behavior might actually make me annoyed with someone like Skye, so I might have understood May’s reaction, but not this time. This time, I found myself angry at May for being so mean. Believe me, I’m as surprised as anybody else.

Finally, there was Coulson’s story. Admittedly, his didn’t really get too far until the very end of the episode, but once it became clear that Centipede wanted him and not Peterson, it was also clear why.

If they’re interested in making super-soldiers, they would absolutely want to poke and prod a guy who had quite literally been beaten death. I’m just sad we have to wait until January to finally find out the truth about his trip to “Tahiti.”

“I was kind of hoping to keep this private.”
“Agent May specializes in private.”

Fitz reminding Simmons that maybe she shouldn’t be so excited that the super-soldier formula had been fixed.

Coulson reminding Peterson that May wasn’t too happy with him because the last time they saw Peterson, he threw her into a brick wall.

Ward getting caught talking about Peterson, by Peterson.

Coulson telling Ward that, in his experience, getting involved with someone from the agency was just asking for trouble.

Ward informing Peterson that having powers was cheating.

Coulson standing outside of Skye’s door and trying to decide if he should go in.

Coulson finding out that the deal wasn’t for Peterson, it was for him.

Practically jumping out of my chair when the first, then the second explosions went off.

What did you think of this episode? Are you excited to finally find out what happened to Coulson when he died?