Brad Paisley is a staple in the country music industry, and was honored for his contributions to the world of music videos. 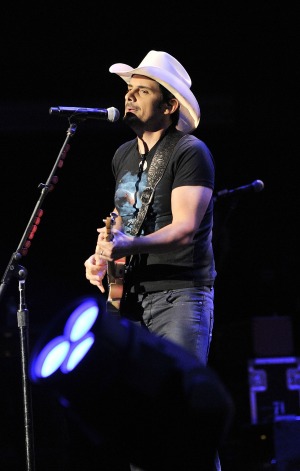 Despite Brad Paisley‘s boyish good looks, he has been in the world of country music for a while. He was honored at the American Country Awards Tuesday night for their Video Visionary Award.

Paisley has been using his music for more than a decade, mixed with his video visions, bringing inspiring and creative videos to the world of music. Country music legend Dwight Yoakam presented Paisley with the award, and a video montage played in the background.

The award isn’t given out every year — Toby Keith was the last to win back in 2010, according to Taste of Country. After accepting the award, Paisley performed his song “Mona Lisa.”

Yoakam honored Paisley by presenting him with a blue guitar.

The best for last? Country artists ditch the ACAs >>

“I gotta say, you guys have the absolutely coolest trophy of any awards show,” Paisley said, adding, “It’s horribly out of tune.”

Here are some key video moments in Paisley’s career:

“Beat This Summer” — The video from early 2013 has more than 2.6 million views on YouTube.

One of Paisley’s live videos, “Alcohol.”

Congrats to Paisley on his well-deserved reward!!