Both are archers. Both display incredible courage. Both are in love triangles. It’s no wonder we’re comparing the two and wondering which one could reign supreme in a fight. Find out who we think is the bigger bada**. 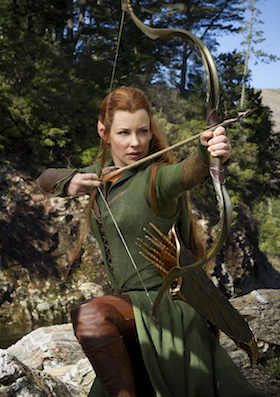 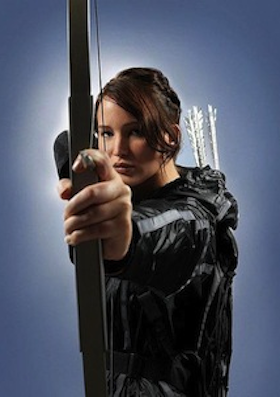 Tauriel: Head of the Elven Guard of the Mirkwood Forest, she has 600 years of experience with numerous kinds of weaponry. She’s also known for her healing powers and has a vast knowledge of herbal remedies.
Katniss: Her father taught her to hunt with her crossbow when she was a little girl. She’s also an excellent hunter, trapper and tree-climber with vast survival knowledge. This training served her well when she competed in the deadly Hunger Games and again in the Quarter Quell.

Tauriel: Though small in stature, she is an experienced warrior. Elves are more connected to the Earth and their senses are closer to that of an animal’s. Pure instinct guides Tauriel, not intellect. She can smell danger and her large ears can hear low growls, helping her to quickly react accordingly.
Katniss: She’s a strategic thinker, highly intellectual and seems to have a sixth sense when it comes to danger. By now, the girl from District 12 is a fearless competitor and is poised to oversee a revolution in Panem. Katniss also has an uncanny ability to form solid allegiances with those who should be her enemies.

The Hobbit: Desolation of Smaug book vs. movie >>

Tauriel: The great forest of Mirkwod in the land of Middle Earth which is in the eastern region of Rhovanion, between the Grey Mountains and Gondor.
Katniss: District 12, which is the most impoverished district of the nation of Panem, located in western North America.

The actresses who play them

Evangeline Lilly: The 34-year-old Canadian actress and mother of one is best known for playing Kate Austen in TV’s Lost. When her house in Hawaii burned down and destroyed all her personal belongings, she said she felt “liberated.” Clearly, she’s one tough cookie well acquainted with adversity.
Jennifer Lawrence: This 23-year-old actress is no doubt the hottest star in Hollywood right now and can be seen later this month in American Hustle. We have to wonder, though, with her incredibly busy schedule, isn’t she exhausted?

5 Things to know before seeing The Desolation of Smaug >>

Tauriel: #Tauriel has been active on Twitter since June 22, 2011, and featured in hundreds of tweets. Only 147 people have “liked” Tauriel on Facebook — so far. Expect that number to grow over the weekend.
Katniss: #Katniss has been used in tens of thousands of tweets since April of 2010. On Facebook, 118,262 people have “liked” Katniss. She’s clearly in the lead… so far.

Tauriel: If there’s one thing the elf knows, it’s the Mirkwood Forest. We predict she’d kidnap one of Katniss’ loved-ones (Her little sister, Prim, perhaps?) to lure Katniss into her territory. Tauriel would likely take advantage of Katniss being in this unfamiliar environment and gain the upper hand.
Katniss: She’s a game-changer. Most likely, she would use her excellent archery skills to fend off Tauriel, but would need to counter the elf’s supernatural abilities by outwitting her. We predict she’d use the element of surprise.

Music always on her iPod

Tauriel: An endless shuffle of Bjork, Florence and the Machine, The Pretty Reckless, The Decemberists’ The Hazards of Love album and Stardeath and White Dwarfs when she’s feeling like rocking out.
Katniss: Cold Play, Lorde, London Grammar, Lissie, some Ke$ha, Trent Reznor and Atticus Finches’ soundtrack to The Girl with the Dragon Tattoo and Daft Punk when she’s feeling silly.

Tauriel: She will return as Tauriel in 2014’s The Hobbit: There and Back Again.
Katniss: The Hunger Games: Mockingjay Part 1 releases in November 2014 and Part 2 in November 2015. 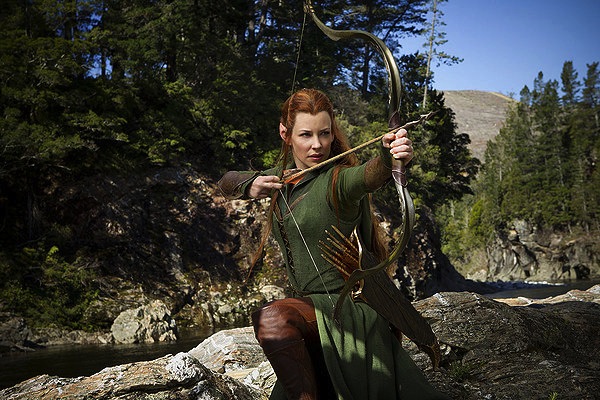 Our decision is based on the fact that Katniss is incredibly (and thankfully) selfless and humble. She’d do anything to save those she loved — including die for them. We think the professional killer-elf Tauriel would put her survival over anyone else’s and that makes her poised to win the smackdown.

The Hobbit: The Desolation of Smaug opens today!

Photos from The Hobbit: The Desolation of Smaug courtesy of Warner Bros., Photo from The Hunger Games: Catching Fire courtesy of LionsGate.