It’s nice to be a supermodel and a mommy. Gisele Bündchen schools us all on breastfeeding and glamorizing. 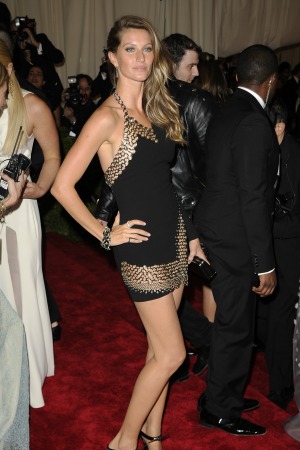 If only motherhood were that easy. Gisele Bündchen sure makes being a parent look breezy and glamorous. The mom-of-two posted an Instagram photo on Tuesday that will turn some moms green with envy.

Bündchen is seen cradling her one-year-old daughter Vivian who is being breastfed while the supermodel is attended to by her glam squad. One woman is giving her a manicure while a makeup artist tends to her face. If that wasn’t enough attention, her hairstylist is curing waves into her long locks.

She captioned the photo, “What would I do without this beauty squad after the 15 hours flying and only 3 hours of sleep #multitasking #gettingready.”

Even after a long night of travel, the 33-year-old model looks incredibly peaceful and beautiful in the photo.

As a mom to Benjamin, 4, and Vivian, the supermodel has been very vocal in the past about breastfeeding. In 2010, she caused all sorts of controversy when she claimed to Harper’s Bazaar U.K. that breastfeeding should be a “worldwide law.”

She later had to respond to the criticism since she offended so many mothers who didn’t have the ability to breastfeed.

Victoria’s Secret Fashion Show: Angels from the ’90s to now >>

Bündchen wrote on her blog, “I understand that everyone has their own experience and opinions and I am not here to judge. I believe that bringing a life into this world is the single most important thing a person can undertake and it can also be the most challenging. I think as mothers we are all just trying our best.”

Hopefully this photo won’t send the masses into a frenzy since not every mother has a black tie event to attend on Tuesday night.