The man accused of assaulting Paris Hilton’s little brother is telling his side of the story — and none of it includes Lindsay Lohan. 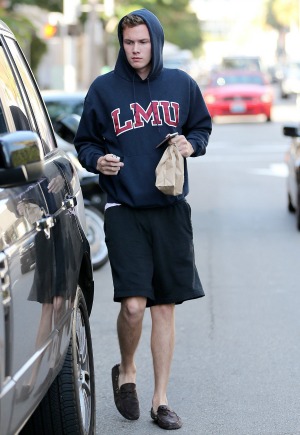 Ray LeMoine is being accused of beating the tar out of Paris Hilton’s little brother Barron Hilton at a Miami mansion party over the weekend, and after days of being smeared by the press he’s telling his own side of the story.

In a piece for Vocativ, LeMoine sets the stage for the argument that led to Barron’s bloodied face, and not only does he make it sound as if the spoiled heir totally deserved what he got, but nowhere is there a mention of Lindsay Lohan other than she happened to be staying at the mansion.

Not Hilton’s first scuffle with the law >>

LeMoine explained that he came back to the house to find it overrun with uninvited guests — including Barron.

“It was 5 a.m. by the time I got home to the rented mansion and discovered a huge party. I didn’t know anyone there, the crowd was lame, and I went to bed,” he explained.

“In the morning I woke up to discover that a bunch of people had been up all night doing Molly. My friend’s name was on the lease of this mansion, and we didn’t want anyone to trash it, so we started kicking people out. I walked out to the patio, and I saw this blond brosef in a top hat and John Lennon sunglasses. He seemed nice at first, but when I asked him to leave, he went bonkers.”

“Barron got in my face and wouldn’t shut up about his stupid family. Eventually things got so heated that he pushed me. And that’s when the alleged assault, which, of course, I deny, took place. (I imagine he wouldn’t have even gotten cut if it wasn’t for those stupid sunglasses.)”

LeMoine says Barron called TMZ himself to break the story at the urging of his sister Paris, and that he had a right to defend himself and the property that was under his care.

“It’s funny that here in Florida, where George Zimmerman got away with shooting and killing an unarmed teen on public property, police are hunting me for allegedly punching some dude who stepped to me and wouldn’t leave my rental.”

For now, LeMoine says he’s hiding out in the Florida Keys until it all blows over.

Tell us: Did Barron Hilton deserve his beat down?