It’s not a pretty list to be on for 2013. This year’s “winner” is Adam Sandler as Forbes‘ Most Overpaid Actor in Hollywood. 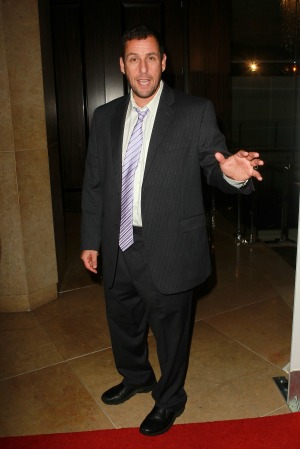 No one wants to be at the top of this list, but someone has to be. This year, it’s Adam Sandler. The actor tops Forbes‘ list of Hollywood’s Most Overpaid Actors. The magazine compiled the top celebrities whose salaries do not deliver a decent return at the box office.

Forbes cited two of Sandler’s recent movies, Jack & Jill and That’s My Boy. The films grossed $150 million and $57 million respectively. Once the movies’ budget is factored in, the financial magazine estimated that “for every dollar Sandler was paid on his last three movies, the films returned an average of $3.40.”

VIDEO: Adam Sandler attacked by a cheetah on safari >>

His recent hit Grown Ups 2 was not factored into the equation because it was a July film. Forbes only calculated movies through June 2013.

The 47-year-old actor isn’t the only one who isn’t giving the studios a great return on their investments. Two ladies follow behind Sandler with Katherine Heigl in the No. 2 position and Reese Witherspoon in No. 3. Heigl’s return averaged $3.50 while Witherspoon brought in $3.90.

This list is probably one that actors wish the magazine wouldn’t publish. No one wants the studios reminded of their recent flops or their sky-high salaries.

A few surprising names made the list, including Denzel Washington at No. 6 and Matt Damon at No. 9. While both are award-winning actors, they don’t deliver as big a box office punch as some of their other A-list peers.

The top 10 on Forbes‘ list of Hollywood’s Most Overpaid Actors: