Eleanor Parker, the actress praised for her role as the manipulative baroness in the hit musical The Sound of Music, has passed away. 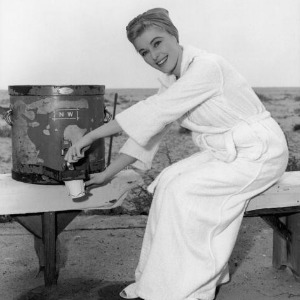 One of Old Hollywood’s greats, Eleanor Parker, has died at the age of 91, but she was surrounded by those who loved her.

A family friend, Richard Gale, told the Associated Press that Parker had died on Monday morning due to complications from pneumonia. Gale said, “She passed away peacefully, surrounded by her children at a medical facility near her home in Palm Springs.”

Parker was born in Ohio in 1922. She was desperate to break into the acting world, taking lessons and waiting tables to make ends meet, before she made her acting debut at age 19 after moving to California.

Parker enjoyed popularity in the early ’50s. It was her challenging, versatile roles and determination to succeed that saw her nominated three times for the prestigious Academy Awards in 1950, 1951 and 1955.

After the ’50s the Caged actress was not as popular, but she managed to land a major role in the hit 1965 film The Sound of Music alongside Christopher Plummer and Julie Andrews. The redheaded star was praised for her outstanding performance as Baroness Elsa Schraeder in the popular musical and, although not her last role, it remained her most memorable.

Plummer released a statement in which he praised his late co-star, saying, “Eleanor Parker was and is one of the most beautiful ladies I have ever known. Both as a person and as a beauty. I hardly believe the sad news for I was sure she was enchanted and would live forever.”

The late star worked less frequently after appearing in The Sound of Music but appeared in Murder, She Wrote, Fantasy Island and The Love Boat and was well known for being a woman of many faces. In a 1988 interview, Parker said, “I’ve portrayed so many diverse individuals on the screen that my own personality never emerged.”

Parker was able to live just long enough to see her musical hit have a renewed life: NBC recently aired the greatly anticipated live production of The Sound of Music on Dec. 5.

Parker’s Hollywood star may have burned out yesterday, but she will be remembered in the hearts of fans for years to come.

Our thoughts are with her family at this sad time as she joins the list of other greats who have passed away this year.