Osric Chau has had to say goodbye to Kevin Tran, but he’s got a lot of projects planned for the future, including one that will reunite him with some of the Supernatural cast and crew. 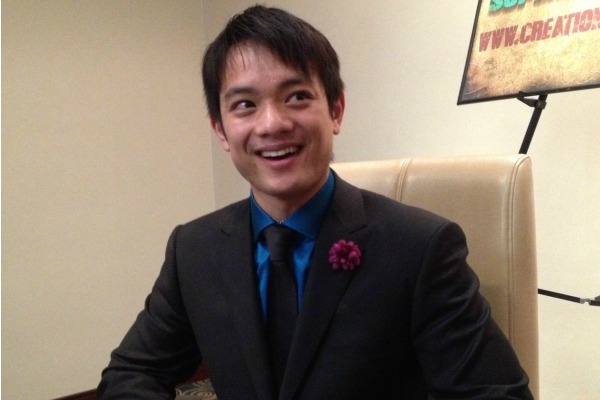 On last week’s Supernatural mid-season finale, a lot of significant things happened. But perhaps the most significant was Kevin Tran meeting an untimely death at the hands of Gadreel (who was using Sam’s body at the time).

Last month, SheKnows spoke to Osric Chau (who plays Kevin on the show) along with other press at Creation Entertainment’s Salute to Supernatural convention in Burbank, California. While Chau never spoke of Kevin’s fate, a lot of what he said can be interpreted as his way of saying goodbye to the character.

Chau has been working on a lot of projects as a producer and he spoke about how hard that job is, but also why he sometimes prefers it to being an actor. “As an actor I honestly feel way too pampered,” Chau said. “I’m someone who likes to really work and I like to feel like I’m earning my keep. And as an actor I don’t always get that sensation. So when I do all these films, and when I’m talking about working hard, it’s usually as a producer. I like to be in the nitty-gritty parts of things. I like to get in there and make sure everyone’s happy.”

Before meeting his untimely end, Kevin had been working hard for the Winchesters. As it turned out, Chau didn’t have to work too hard to tap into Kevin’s recent strung-out state. “When I was doing those Kevin scenes, I was actually shooting my own project on the side at night, so I was really tired,” Chau revealed.

Being a producer is hard work, but Chau said there are many reasons he enjoys it.

“I wouldn’t really call it work because I enjoy it so much. I enjoy that collaboration. If I know two very talented people — they don’t know each other but I’m putting them together — there’s a chance for magic. There’s always a chance of something coming from those two working together and if I can facilitate that, that’s amazing. That’s the best feeling in the world.”

Chau’s work as a producer sometimes has him feeling like a mom on set when he’s coordinating everything behind the scenes. It’s something that has also helped him to play Kevin.

“Some people are just doing manual labor [and] you try to make it up to them by either paying them or covering their cost or anything. It’s [about] having the experience be good, build a network for them, anything, and as a producer I really like doing that. So basically I feel like a mom on set, just making sure everyone’s happy, everyone’s getting something out of it because I would feel too bad if I’m constantly asking for people to give and I’m not giving back. So that’s why I get so frazzled. So it definitely helps with Kevin,” Chau said.

POLL: Should Supernatural‘s Castiel stay human or not? >>

Now that Kevin is gone from Supernatural (unless the show decides to bring him back in a uniquely Supernatural way), Chau is looking forward to more projects in his future. “I have, like, seven different projects I’m doing right now,” Chau said. “Maybe none of them will come through, but I start as many things as I can. I make it a point that I’m never the one that drops the ball, which makes it very difficult. I just don’t sleep as much, which is fine.”

Why does Chau feel the need to give back to the people he works with? It’s all thanks to a little movie called Pay It Forward. “I feel like it comes around full circle. I feel like if, any chance I get, I can encourage someone to get them to do something, fine. And do not thank me, thank someone else. It’ll come back around to me at some point maybe. And my family, my friends, the fans — they’ve supported me throughout. I’ve got enough, I’m happy, and if I can pass it on I’ll be like, ‘This was in their name,’ because people have helped me. The movie Pay it Forward, that one changed my life. It was a simple idea: somebody does something nice for you, you do it for somebody else. You can give it back to them, but you can also spread it. I really like that idea.”

Some of the help that Chau has received has been from the cast and crew on Supernatural, which he has used on some of his projects. “Yeah, I never give up an opportunity to give thanks, and that includes the Supernatural cast and crew. There is one project that I’m doing — my one weakness right now is a game called League of Legends and instead of just making this something I only do for fun, I decided to make a live-action short film about it.”

The film itself may be short, but the work involved promises to be extensive. “I did get a few of the Supernatural crew helping me out, but this is like an incredible endeavor,” Chau revealed. “For a five-minute film — we kind of broke it down, because it’s really visual-effects heavy — it’s going to cost like $60,000 to put together, which is $60,000 more than I usually do for a five-minute short film.”

Does that mean that Supernatural fans can look forward to seeing some familiar faces working on the film? Chau says you’ll have to wait and see. “I won’t name names just yet, but we have a lot of very key people involved in Supernatural who have offered their help.”

5 Things the Impala could do in Supernatural Season 9 >>

Supernatural fans might even get the chance to help make the film. “I think if I package it well enough, I can go out to Riot, which is the company that makes the game, and pitch it to them as an idea,” Chau said. “If they want to do it, they’ll do it, if not then I might do a Kickstarter because I feel the gaming community for this game is so large and it is as rabid as the Supernatural community.”

With all of the projects that Chau is working on as producer, it’s hard to believe he still has time to think about taking on more work, but there is one project he would consider: one of those so-bad-they’re-good sci-fi movies. “I love sci-fi,” Chau said. “Why? Because it’s an open playground for diversity of all sorts — women, race, everything — and I absolutely love that about sci-fi. I may just have to write something and put it together.”

So don’t fret, Supernatural fans. Kevin may be gone, but there’s still plenty to look forward to from Chau.

What did you think of Kevin’s shocking death on last week’s episode of Supernatural? Do you plan to check out any of Chau’s new projects?