Former Season 17 Dancing With the Stars partners Peta Murgatroyd and Brant Daugherty were seen making out at a Hollywood event this weekend. 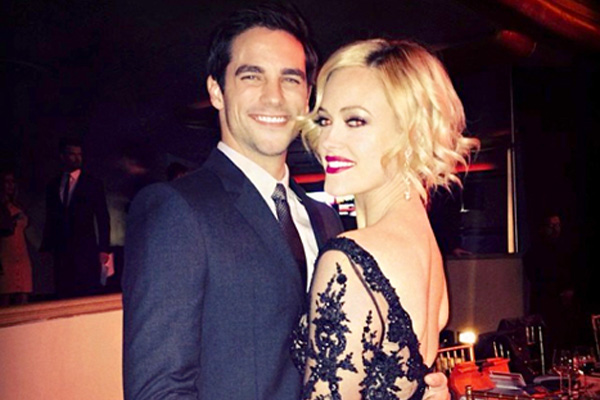 Dancing With the Stars pro dancer Peta Murgatroyd was supposedly seen showing lots of PDA with her former Season 17 celebrity dance partner, Brant Daugherty, during a public charity event over the weekend.

Murgatroyd and Daugherty were spotted kissing at their table during the Trevor Live L.A. event in Hollywood Sunday night, according to Us Weekly eyewitness. They sat in the back of the Hollywood Palladium ballroom being very affectionate, and were inseparable all night.

“While the lights were dimmed for Glee‘s Amber Riley performance, Murgatroyd was rubbing Daugherty’s back and they shared a kiss,” the magazine claimed. “They later kissed again several times during the charity’s raffle.”

While the Pretty Little Liars actor and the 27-year-old professional dancer incited dating rumors during his stint on the popular dance show competition, both denied the romantic claims at the time.

“For the millionth time, no, we are not dating,” Daugherty told Celebuzz last month. “We are locked in a studio with a camera crew for five hours every single day. It’s not a place where something like that can really grow. We are very close, though, we’re very comfortable around each other. I don’t think we’d be able to do our jobs well if we weren’t.”

However, now that DWTS is over, the pair seems to still be hanging out together and they even shared a photo of themselves in an embrace at the event they were seen making out in.

Dancing With the Stars: Who’s fresh and who’s flat >>

Along with the telling photo, Daugherty posted this caption: “Had so much fun at Trevor Live last night with this lovely lady by my side.”

When the two were first paired to dance together on Dancing With the Stars, the 28-year-old actor told Us that he and Murgatroyd shared great chemistry and that they had “hit it off since day one.” Murgatroyd added, “He’s great. I think we work well together.”