President Barack Obama joins throngs of other world leaders and celebrities to honor Nelson Mandela at a memorial service for the iconic statesman. 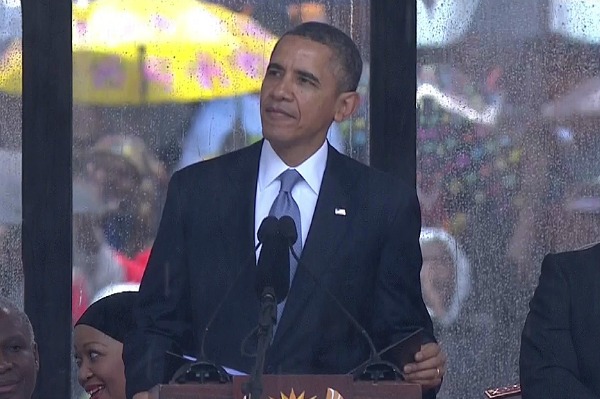 World leaders from around the globe joined celebrities from stage and screen to honor the late, great Nelson Mandela at a memorial service in Johannesburg, South Africa, on Tuesday.

Obama took the stage to eulogize Mandela, the freedom fighter largely responsible for ending apartheid in South Africa and who became the nation’s first black president.

A nation mourns as a hero falls: RIP Nelson Mandela >>

“Born during World War I, far from the corridors of power, a boy raised herding cattle and tutored by elders of his Thembu tribe — Madiba would emerge as the last great liberator of the 20th century. Like Gandhi, he would lead a resistance movement — a movement that at its start held little prospect of success. Like King, he would give potent voice to the claims of the oppressed, and the moral necessity of racial justice. He would endure a brutal imprisonment that began in the time of Kennedy and Khrushchev, and reached the final days of the Cold War. Emerging from prison, without force of arms, he would — like Lincoln — hold his country together when it threatened to break apart. Like America’s founding fathers, he would erect a constitutional order to preserve freedom for future generations — a commitment to democracy and rule of law ratified not only by his election, but by his willingness to step down from power,” Obama said.

“Given the sweep of his life, and the adoration that he so rightly earned, it is tempting then to remember Nelson Mandela as an icon, smiling and serene, detached from the tawdry affairs of lesser men. But Madiba himself strongly resisted such a lifeless portrait. Instead, he insisted on sharing with us his doubts and fears; his miscalculations along with his victories. ‘I’m not a saint,’ he said, ‘unless you think of a saint as a sinner who keeps on trying.'”

The world reacts to the death of Nelson Mandela >>

“We will never see the likes of Nelson Mandela again. But let me say to the young people of Africa, and young people around the world — you can make his life’s work your own. Over 30 years ago, while still a student, I learned of Mandela and the struggles in this land. It stirred something in me. It woke me up to my responsibilities — to others, and to myself — and set me on an improbable journey that finds me here today. And while I will always fall short of Madiba’s example, he makes me want to be better,” Obama explained. “He speaks to what is best inside us. After this great liberator is laid to rest; when we have returned to our cities and villages, and rejoined our daily routines, let us search then for his strength — for his largeness of spirit — somewhere inside ourselves.”

Supermodel Naomi Campbell, who enjoyed a close relationship with Mandela after meeting him in the early ’90s, was also in attendance and shared her memories of the man in a statement released just after his death. Calling him “a figure of strength, hope, freedom, selflessness and love,” she said, “I join everyone across the world in mourning his passing. However, he was much more than just a figurehead to me — he was my mentor, my honorary grandfather, my Tata.”

10 Life lessons we can all learn from Nelson Mandela >>

“Since meeting him in 1993, he guided me and gave me a reason for being in the tough times of my life. He changed my perception of the world. It will take time to come to terms with his absence, but I know his energy and impact will forever be in the core of my spirit.”