If you want to get on Ben Affleck’s bad side, then take a picture of his children. The Argo star and his wife Jennifer Garner are campaigning hard to protect their children from constant media scrutiny. 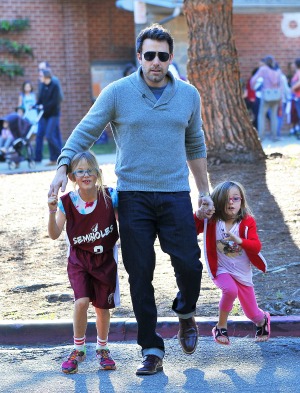 Ben Affleck is one of the Hollywood greats and has been celebrated for his work as a director as well as his acting in several top films. So it is not really surprising that the paparazzi want to follow him around and get some pictures.

Throw his lovely wife Jennifer Garner into the mix and you have a very popular celebrity couple who gather a lot of attention from the media.

The Argo actor may understand this is part of show business, but he hates the fact that his children have become a target for the paps as well.

Affleck and Garner have a beautiful marriage and a beautiful family, which includes their three children — 8-year-old Violet, 4-year-old Seraphina and 21-month-old Samuel — and the couple desperately want to shelter their children from media scrutiny.

The star revealed to Playboy magazine, “You can say what you want about me. You can yell at me with a video camera and be TMZ. You can follow me around and take pictures all you want. I don’t care.”

“There are a couple of guys outside right now. Terrific. That’s part of the deal. But it’s wrong and disgusting to follow children around and take their picture and sell it for money.”

“It makes the kids less safe. They used to take pictures of our children coming out of preschool, and so this stalker who had threatened to kill me, my wife and our kids showed up at the school and got arrested. I mean, there are real practical dangers to this.”

This is a subject that the Good Will Hunting star feels very strongly about and he wanted to make his views clear by adding: “My kids aren’t celebrities. They never made that bargain … As their father it’s my job to protect them from that stuff.”

“I try my very best, and sometimes I’m successful. The tragic thing is, people who see those pictures naturally think it’s sweet.”

Now that Affleck has just been confirmed as the new Batman, even more attention is surrounding him, but he, along with his wife, are working hard to protect the rights of children in showbiz.

Earlier this year, actress Halle Berry and Garner took a step in the right direction and managed to get the Senate Bill 606 passed in California, which means that as of next year, a paparazzo can be jailed or receive a very steep fine if he or she harasses or invades the privacy of children.