Kanye West is no stranger to controversy and he loves comparing himself to others, but the rapper just took things a step further when he compared his tour to being in a war. 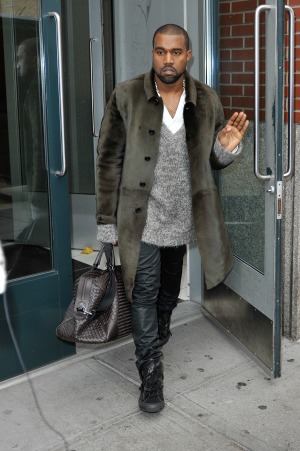 Oh, Kanye West, you have done it again! Once again, the “New Slaves” rapper has thrown out a controversial statement comparing his life to a title or a situation that he really does not deserve!

You might remember that West previously compared himself to Michelangelo and Walt Disney during an interview on the Power 105 radio station.

However, the star has now gone one step further because he believes he’s just as brave as any soldier who is fighting a war.

Why? Because he is on his Yeezus tour. If you haven’t already seen the similarities, then West will tell you himself.

The “Bound 2” rapper revealed on the Saturday Night Online radio show: “Like, I’m just giving of my body on the stage; I’m putting my life at risk, literally!”

“When I think about when I’m on the ‘Can’t Tell Me Nothing,’ and ‘Coldest Winter’ moment, like that mountain goes really, really high. And if I slipped…”

West believes that taking risks is part of the job and that to have a successful tour he needs to put his life on the line and give his work his all.

West continued, “Like you literally [sic] going out to do your job every day, knowing that something could happen. Something can happen to you.”

“I’ll explain to my daughter [North] one day, that me and her mother, we had to fight for this position that we’ll finally have.”

There is no denying that West has made a massive empire for himself and has gained great respect in the music and fashion industries. However, do you think his egotistical rants are putting a massive damper on his success?