Garth Brooks just couldn’t sit still anymore. His babies are raised, so it’s time for him to hit the road. 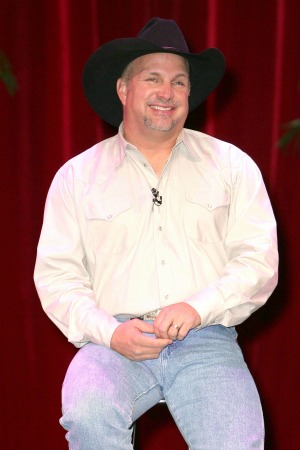 He might have retired in 2000, but he got the 14-year itch. Garth Brooks announced on Good Morning America on Monday that he would return to the stage with a world tour in 2014.

The announcement was regarded as a surprise since he was only on the morning talk show to talk about his new album, Blame It All on My Roots: Five Decades of Influences. The six-disc CD set includes his greatest hits, some cover songs and a DVD from his Las Vegas show.

Garth Brooks is a grandpa — just don’t tell anyone >>

He told host Robin Roberts, “You know what, since it’s you and since we’ve had a history forever, let’s announce it. We’re going on a world tour in 2014. I can’t believe I just did that but you are a doll.”

The 52-year-old singer called it quits in 2000 to spend time with his then-wife Sandy Mahl and his three daughters. Now that they are all grown up and his youngest daughter is a senior in high school, Brooks is ready to return to work with the blessing of current wife Trisha Yearwood.

He did admit that he was initially afraid that the tour would be a “wheelchair and walker tour kind of thing,” but Brooks is proving he has what it takes after doing a residency and TV special at the Wynn Las Vegas.

The grandpa-to-one gushed over his Sin City experience, “You’re just out there with you and your guitar and you depend on the people to kind of take care of you and they have my whole career and so Vegas was just a love-fest.”