The 20th anniversary of Kurt Cobain’s death is only a few months away, and he received a Grammy nomination this year — in a rap category. 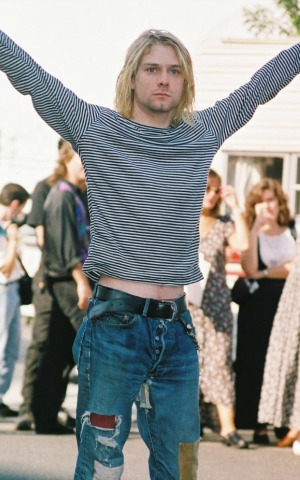 Kurt Cobain died nearly two decades ago, but he is still making his mark on popular music. That point was proven Friday night when he was nominated for a Grammy Award — sort of.

Cobain was nominated, along with his Nirvana bandmates Dave Grohl and Krist Novoselic, as songwriters on Jay Z‘s “Holy Grail” for Best Rap Song. That’s because the rapper (as rappers often do) sampled lyrics for the song from Nirvana’s “Smells Like Teen Spirit.”

While it was the only Grammy nomination Cobain received, Novaselic and Grohl were also nominated along with Paul McCartney and Pat Smear (from Grohl’s other band the Foo Fighters) for Best Rock Song. Their song “Cut Me Some Slack” will be up against the Rolling Stones, Black Sabbath, Gary Clark, Jr. and Muse.

A year ago, the Beatle stepped in for Cobain during a Hurricane Sandy benefit. But he wasn’t sure who they were were before the show.

“I didn’t really know who they were,” McCartney said of Nirvana at the time. “They are saying how good it is to be back together. I said ‘Whoa? You guys haven’t played together for all that time?’ And somebody whispered to me ‘That’s Nirvana. You’re Kurt.’ I couldn’t believe it.”

Jay Z’s nomination was no surprise — he is up for a total of nine awards. Although all the nominations, except one — his duo, “Suit & Tie” with Justin Timberlake — were in the rap categories.

Cobain died nearly 20 years ago, which was a huge loss in the music industry. The anniversary of his death is coming up in April, and with many of the children of the grunge age fully grown, the day is likely to be remembered across the country, and the world.