In the new Vikings promo, Ragnar is undergoing a major transformation. Will we see more glimpses into mythology on Season 2? 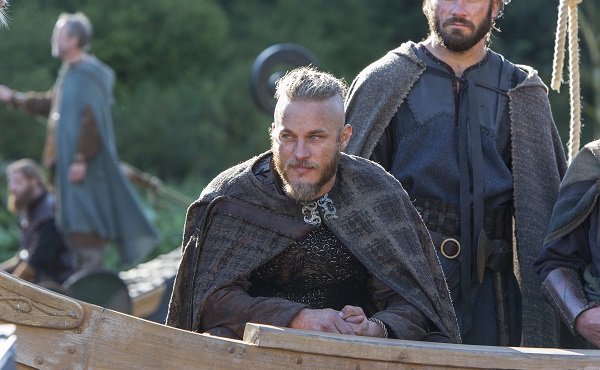 The return of Vikings is just a couple short months away. The brand new promo for Season 2 has us swooning and shaking in fear all at the same time. Why? It looks like Ragnar is set to return more powerful than ever.

The new promo is soundtracked by Lorde’s “Glory and Gore.” Perhaps the most perfect song ever for Vikings, right? When the image of Ragnar (Travis Fimmel) fades and is replaced with the Vikings logo, Lorde’s words echo loud and clear: “Victory is courageous.” We all know that glory and gore are exactly what the vikings always fought for. If they regretted their bloody battles, history has yet to show it. Throughout Season 1 we watched as Ragnar struggled against Earl Haraldson in an effort to see his brothers forge further than Haraldson usually let them go. In the end, we saw Ragnar find victory over the Earl. Where will that victory find him in Season 2, though?

Brotherly love and more death ahead on Vikings Season 2 >>

The promo hints at Ragnar’s closeness to his patron God, Odin, too. As Ragnar’s head so beautifully begins to break away and to show the feathers and then the head of the raven, we’re clearly supposed to be reminded of Ragnar’s relationship with the legendary god from whom he believes he descends. Is his mind breaking away to indicate Ragnar will “lose his mind” as he attempts to follow Odin? Or are we simply being shown that Ragnar has become so close to his god that they share a mind?

Watch the video and tell us what you think.

Earlier this year, History released the first Season 2 promo at Comic-Con. The teaser highlighted one of the most gory moments of Vikings thus far. Even Vikings fans who enjoy the sweaty, bloody moments had a hard time swallowing this preview, though. Why? Because it looks like Ragnar’s brother Rollo/Rolf (Clive Standen) will slaughter Floki (Gustaf Skarsgård) in the heat of one seriously gruesome battle. Not only does he appear to kill him, but he seems to do so with the utmost intent. What could anyone ever have against the awesome Floki? Our best guess is jealousy over the friendship between Rollo and Floki.

To find out how it all plays out (and to root for the survival of Floki), stay tuned to History in February for Vikings Season 2.