This holiday, enjoy some dysfunctional family fun with Despicable Me 2. Actor Steve Carell voices Gru, the villain-turned-dad who has a very unique parenting style. 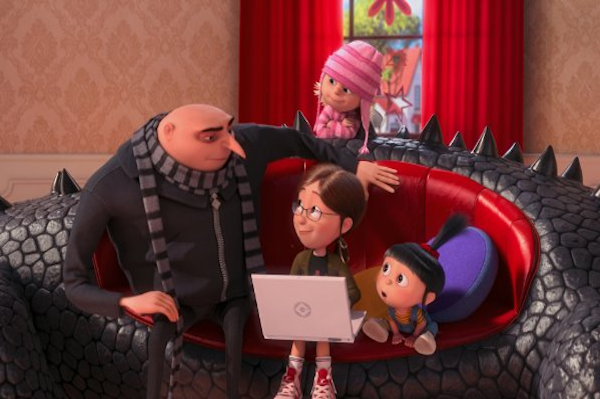 Last summer, everyone’s favorite villain was back in theaters. In Despicable Me 2 (Steve Carell), Gru returned as a new and improved man. He went from cold-hearted evil-doer to lovable dad. In the first film, he became the father to three little girls: Margo, Agnes and Edith (voiced by Miranda Cosgrove, Elsie Fisher and Dana Gaier).

In this exclusive behind-the-scenes clip, Carell talks about the similarities between he and his character. Parenthood has changed Gru and he’s willing to go above and beyond to protect his girls.

“I’m a parent. I have two little kids and the fact that he would do anything for his kids, that’s exactly how I feel,” reveals Carell. “I think that’s how most parents feel. It’s that they’d do anything to protect, to save, to help and that’s what he does.”

According to Coffin, Gru “thinks of himself as a very successful villain, but he’s not. He’s got a heart of gold.” Renaud chimes in, “I think Gru is a great parent, but sometimes you see him get a little frustrated. You know, a little tired. Steve can really nail that. It’s a very subtle quality but I think it’s an important one.”

At the heart of it all, Gru is an overprotective dad. We’ve all encountered some of those, but he’s different. He has freeze guns and hundreds of Minions at his disposal. Gru may not be perfect but he loves his children and there’s no doubt about that.


Despicable Me 2 is available on DVD and Blu-ray now.