Justin Bieber said he gets attacked by the media every day in a way that’s no different than kids being bullied at school. 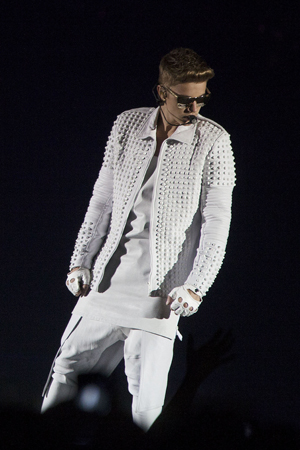 He may be a mega pop star, but Justin Bieber claims that he gets attacked by the media every day, in very much the same way some kids get bullied at school.

Bieber called into On Air with Ryan Seacrest on Monday and talked all about his Believe film, as well as the constant bullying he has to endure from the media.

VIDEO: Justin Bieber gets sexy with blonde in “All That Matters” >>

“People don’t see me living as a 19-year-old boy… I’m still finding myself and when I have the media attacking me every day it’s no less bullying than, you know, what happens in school. These people calling me names and saying things, they don’t know what’s true or not.”

The singer also revealed that he feels Never Say Never “showed hope, and I think Believe is how you get back up when you fall down, and really [that’s the] story of what’s going on behind the scenes.”

Additionally, Bieber said that his new movie will show fans who he really is “as a person,” making mistakes and growing up like anyone else. “I’m not perfect, I’m not a robot. People forget that I’m a human being. I have to make mistakes and grow stronger.”

Justin Bieber: His epic playboy night in Brazil with 30 girls >>

Bieber claims that he wants his fans to see Believe so they can get a better look into his life and see his true character for themselves. “People don’t get to see me… I’m becoming a man but I’m still a boy,” he said. “I just want to help people and inspire the world, man.”

As far as the craziness surrounding his current tour and controversial events, Bieber said that “a lot of stuff has been confused,” he’s been out touring and “so no one really knows what I’m doing out here.” But he’s content that his close friends and family know what he’s really like and what’s true or not true.

To contribute to Music Mondays, Bieber released another new single today, titled “Confident,” which is already No. 1 on iTunes.