The Wanted fans will be heartbroken right now because one of their favorite band mates has been snatched off the market for good: Siva Kaneswaran just got engaged! 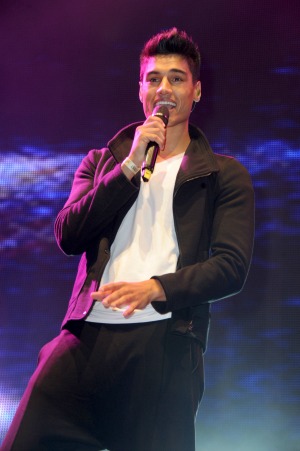 Many of The Wanted‘s fans will be feeling heartbroken right now because the seriously talented and gorgeous star Siva Kaneswaran is officially off the market!

The “Chasing the Sun” singer just recently popped the question to his longtime love Nareesha McCaffrey and now the happy couple are engaged.

It was a long time coming because the beautiful couple had already been together for six years — an eternity in Hollywood relationship terms — but the 25-year-old singer finally thought it was time to get down on one knee and make his girlfriend the happiest woman in the world.

The pair had originally met when the gorgeous Kaneswaran was still a model and he was happy to reveal his engagement plans to the new issue of Hello! magazine, saying, “It was like a military operation to plan the proposal. I couldn’t even tell the other boys in the band in case they blew the surprise.”

“About a month ago I found out Nareesha was planning a surprise party on my birthday with her family, so I thought, perfect! She walked in to plan my surprise and everyone was there already and I was on one knee ready to propose.”

“I wasn’t nervous until the last 15 seconds and thought, ‘My knees are going to give way,’ I can’t remember some of it, the blood went to my head…”

He was unable to enjoy the moment for a brief second, though, because Kaneswaran’s girlfriend has a rather wicked sense of humor and originally rejected his proposal.

The “Walks Like Rihanna” singer recalled the moment: “When it came to proposing I had a little speech and said, ‘The best gift you could give me would be for you to be my wife.’ And she said ‘no’ and then she said ‘yes.'”

“That’s just her sense of humor. She’s always making jokes like that — but I nearly fainted!”

No doubt the joke was not that funny at the time because proposing to someone is a pretty big deal, but the couple do seem incredibly happy and understand each other. Not to mention that his shoe designer lady now has a custom made three-carat diamond solitaire ring to wear on her finger!

Kaneswaran added, “It feels a great place to be in. it’s the next step and I feel grown up and mature. It’s more of a settled, happy feeling… I think [The Wanted will] be really happy for us. They’ve expected it for a long time. They’ve known Nareesha as long as they’ve known me.”

Now we are wondering whether any of the Kaneswaran’s band mates: Jay McGuiness, Nathan Sykes, Tom Parker and Max George, will be make it onto his best man’s list.

Congratulations to the very happy couple!