Selena Gomez wasn’t feeling the Christmas spirit during the technical difficulties at this year’s Jingle Ball. The singer cursed in frustration and stormed offstage, cutting her set short. 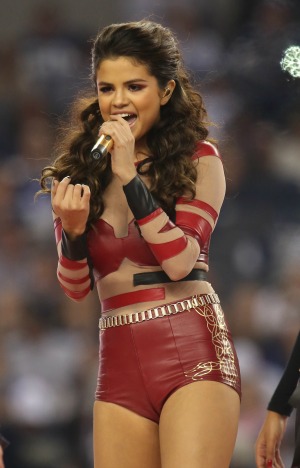 Has yet another Disney Channel star fallen into a downward spiral? If rumors are true, then it seems that Selena Gomez‘s recent behavior would suggest she’s headed in that direction.

The “Come & Get It” hit maker was performing at the Jingle Ball, but was not feeling the Christmas spirit and reportedly dropped a massive F-bomb before storming offstage.

Why? Well, apparently the singer’s sound was not working properly and she couldn’t bear it any longer.

Gomez may have been taking a page from ex-boyfriend Justin Bieber’s book as she abruptly left the stage at the Staples Center before even finishing her set for the KIIS FM charity event in Los Angeles, California, on Friday.

We understand it can be frustrating for artists when their sound is not working properly, but the crowd, which was mostly filled with children who had been desperate to see their hero perform, were left feeling upset that Gomez did not finish her set.

According to Us Weekly, the former Disney star was heard telling the crowd: “Sorry, the sound isn’t working!”

“Are you guys having a good night? I promise, a lot cooler people are gonna come out tonight.”

“Is it OK if I perform two more songs and you guys can get to it?”

However, the audio did not improve for the songstress and she was getting more agitated by the minute, apparently dropping the F-bomb as soon as she finished her song and then storming offstage.

A source revealed to Us Weekly, “She was p***ed doing the next song and she said two more songs. [She] didn’t do the last one.”

We do have to give Gomez credit, though. She did thank her fans earlier in the evening with a heartfelt speech, saying, “I have to thank you guys so much for allowing me to be able to perform the music that I love.”

“And I have to say that before you guys go on to the people that you care about, I really appreciate you supporting everything that I do.”

At least the crowd was able to look forward to other performances, including those from Robin Thicke, Macklemore, Miley Cyrus twerking with Santa and the lovely Ariana Grande, and all for a good cause.