Meredith Baxter is a bride again. She and her longtime partner Nancy Locke marry after seven years of dating. 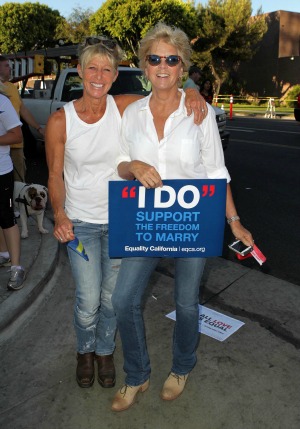 According to People, the 66-year-old actress and her contractor wife were joined by close family and friends in an intimate ceremony. Baxter’s five children, two from her first marriage to Robert Lewis Bush and three from her second marriage to David Birney, were all in attendance.

Kim Kardashian wedding destination is… the Palace of Versailles >>

The reception and ceremony were heralded by music with a friend playing guitar and singing during the wedding while Locke’s band played during the party. The newlyweds even took dance lessons to prepare for their first dance together.

Baxter came out as a lesbian in 2009. In fact, it was gossip blogger Perez Hilton who forced the TV star to come out of the closet. He published photos of her and Locke arm-in-arm and mentioned their vacation on a lesbian cruise.

She told the entertainment magazine at the time, “I feel like I’m being honest for the first time.”

Baxter’s family is incredibly supportive of their mother.

Her son Peter shared, “I just couldn’t stop smiling because she finally figured it out.”

Did Terrence Howard get married after a month of dating? >>

Baxter and Locke dated for seven years before tying the knot. This is the actress’ fourth marriage. She was married to three men before: Bush, Birney and third husband Michael Blodgett.

It seems that Baxter has done it right this time.

She joyously told People, “Now I understand why marriage caught on!”