Alec Baldwin has no problem getting a job — but let’s hope he keeps this gig. TCM is the latest network to take a risk on the star. 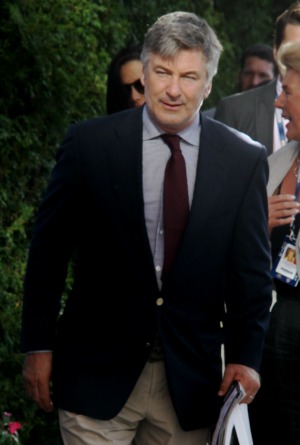 Well, that was fast. Alec Baldwin was only unemployed for a few weeks after being fired by MSNBC. His new gig will be a one-night-only special, though.

Baldwin will be on TCM’s Private Screenings on Jan. 6 to interview the show’s usual host, Robert Osborne. Osborne will be in the hot seat to pick four movies for the evening. The former 30 Rock star will also interview Osborne about his career.

The special will be a part of TCM’s 20th anniversary. Osborne has been the face of the cable channel since its launch.

The two stars have worked together in the past on the network’s show The Essentials. They co-hosted together in 2009 and 2010. The series spotlights a movie each week and adds color commentary before and after the film.

Even though the news was just announced today, the interview was actually taped at the end of the summer.

Ireland Baldwin is determined to defend her dad >>

The timing of the news is rather interesting given the fact that Baldwin’s MSNBC show Up Late was canceled in late November after his gay-slur controversy. The 58-year-old actor blamed almost everyone but himself for the loss of his show.

The actor’s rep and MSNBC confirmed the news about the cancellation with a simple “We are jointly confirming that Up Late will not continue on MSNBC.”

Given the fact that the TCM show is already taped, the network is clearly in the safe zone. They won’t have to deal with any of Baldwin’s verbal volcanic eruptions.