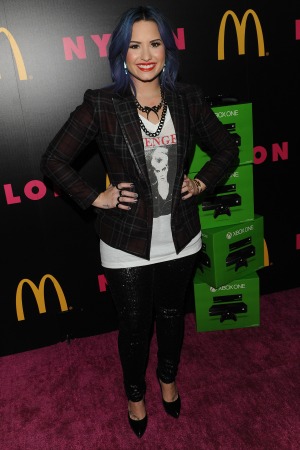 Joe Jonas has been feeling the heat after his New York magazine article came out earlier this week. The former Disney star was honest about his life as a teen performer, but at the sacrifice of a few friends.

While Dylan Sprouse criticized Jonas’ view of his time at Disney, Demi Lovato is taking a bit of a softer approach with her ex-boyfriend. Even though he threw The X Factor judge under the bus by revealing the two had smoked weed with Miley Cyrus, Lovato is more forgiving.

She told E! News how she handled the article and her former beau.

“Well, first I was like, ‘Umm, we need to talk,’ and then we talked and I was fine,” she laughed. “I was like, ‘Look, I’m not mad at you but you need to choose your words more carefully next time.'”

The middle Jonas also talked to the entertainment channel about discussing the matter with the “Made In the USA” singer.

He said, “I had the opportunity to talk with Demi beforehand, and a few other people in my family, and obviously something like this is going to be jarring but Demi and I have a really strong friendship and I would obviously never want to hurt her.”

The 24-year-old seems to have no regrets about coming forward with his story, either.

Jonas said, “It was just something that is my story and my life, and nothing that I necessarily felt like I could talk about before, and it felt like the right timing and I just decided I would tell it all.”

It looks like the musician wants to move his life in a different direction and live in a more honest place.

“There’s this perception of a celebrity or if you do music that you have to be this person that’s untouchable and I don’t want to be that person. I’d rather be somebody who can be open and honest and people can get to know me and relate in some way, hopefully,” shared Jonas.