He already has a girl and now he’s a having a boy! David Arquette and his girlfriend Christina McLarty are thinking blue. 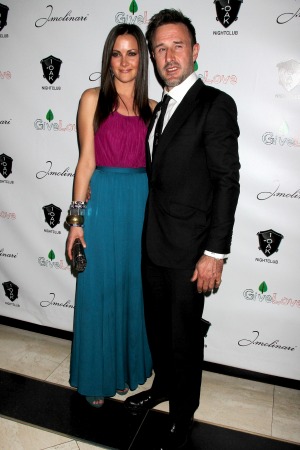 It looks like Coco Arquette is going to have a little brother. David Arquette and Christina McLarty are having a boy!

RadarOnline confirmed the news that the Entertainment Tonight reporter is five months along and expecting her first son. Arquette has a 9-year-old daughter with his former wife Courteney Cox.

The couple attended the Flaunt magazine party together in Hollywood on Thursday and the proud dad was seen pointing at his girlfriend’s baby bump. The 42-year-old actor claimed in October on Watch What Happens Live with Andy Cohen that McLarty was his soul mate.

He gushed, “I’m madly in love with her and she’s the love of my life. Absolutely.”

The couple has been together since September 2011 and they seem happy as boyfriend and girlfriend. Even with a baby on the way, they’re not currently engaged.

Michael Jordan & Yvette Prieto: A bundle of joy is on the way! >>

One issue that Arquette and his love have to deal with is his drinking. After two years of sobriety, he’s fallen off the wagon: He’s been spotted drinking at many nightclubs on both coasts.

He told Howard Stern on a recent appearance, “I’d been sober for two years and four months and feeling that I wasn’t being that true to myself, like what I enjoy and this and that. I’m a drinker so I drink a lot… I’ll smoke a little weed.”

Let’s hope he gets his act together before his new son arrives.