NBC’s Sound of Music Live! was a hit in the ratings. Could this mean a revival of musicals on television? 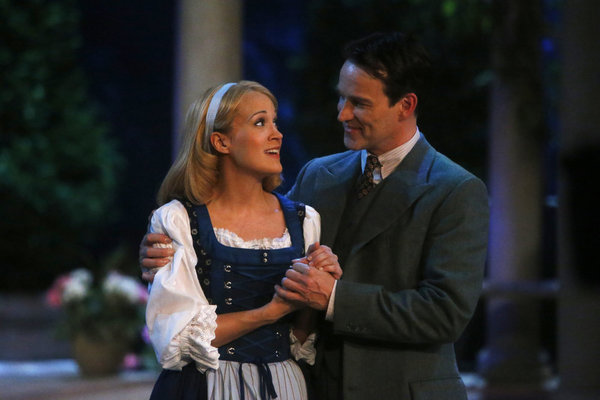 If you were to judge NBC’s Sound of Music Live! purely by its numbers then there’s no doubt that last night’s live musical was a hit. The Los Angeles Times reports that the holiday special brought in a jaw-dropping 18.5 million viewers overall and received a 4.6 rating with viewers under the age of 50.

What does that mean in English? It means that more than 5.5 million people among the coveted 18-to-49-year-old demographic watched the episode. Impressive numbers for a two-hour episode of television based on a play that last ran in 1959 and was adapted into a move in 1965.

Though some of the viewers were probably watching the musical to make fun of it across social media, does that really matter when it garners these kinds of numbers? Underwood was well prepared for the haters, though: she was already online defending the special even before it aired.

Thanksgiving’s over, Fallon! We have Christmas song ideas >>

A quick check of Twitter shows that many viewers enjoyed the show, which seems to suggest that people are looking for something different to watch. With the popularity of Glee, maybe the idea of a live musical isn’t as odd as it might have been a few years ago.

Many are too young to remember, but there was a time when musical specials were all the rage on television, especially around the holidays. With the resounding success of Sound of Music Live! could we be headed back a revival of those simpler times?

As for the performances in last night’s extravaganza, viewers had mixed reviews for those as well. On Twitter, viewers’ comments range from giving high praise to Carrie Underwood for her performance to calling the singer out for not hitting the same high notes that Julie Andrews did in the film. There are so many opinions on both sides that it’s hard to see what the consensus is, but a casual observation shows that more people enjoyed the performance than disliked it.

Baby names from The Sound of Music >>

If you missed the special, don’t fret. Universal will be releasing a DVD of the Sound of Music Live! on Dec. 17, just in time for Christmas.

In the meantime, check out a couple of highlights from the special, including “Do-Re-Mi” and “Something Good.”

What did you think of the Sound of Music Live? Do you plan to purchase the DVD when it is released?