Kelly Clarkson is happy she’s pregnant, but not enjoying her pregnancy. She is not glowing and gets sick multiple times each day, and please don’t tell her otherwise. 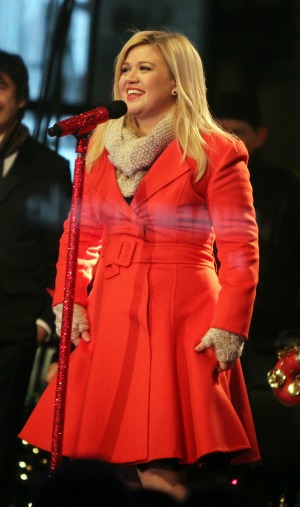 Kelly Clarkson announced her pregnancy less than a month ago, but she’s already experiencing plenty of symptoms. The singer appeared on Ellen on Friday, and told host Ellen DeGeneres that she has had plenty of morning sickness.

“I vomit a good dozen times a day,” she explained (via the LA Times), saying her morning sickness is not limited to mornings. “Like, it’s like bad. Like, I vomited before coming out here and I had a peppermint so you didn’t… It’s like so gross.”

But Clarkson told DeGeneres not to worry, though, because the excitement of being interviewed would stop her from getting sick. The host looked relieved, because she hadn’t brought “a bucket or anything” on set with her.

Clarkson told Savannah Guthrie the same thing last month. It doesn’t seem like the singer had many good things to say about pregnancy, and added (a little violently) how she’s tired of women who don’t talk about the downsides of pregnancy and only talk about how perfect it is.

“You’re not attractive when you’re pregnant,” she said. “Everyone tells you, ‘Oh, you glow and your hair is pretty and your nails are pretty,’ and that’s total crap. I have no glow.”

“I want to like hit all of them with my car,” Clarkson joked (hopefully).

Though she’s now 11 weeks pregnant, it wasn’t that long ago that she married her new husband Brandon Blackstock. She said the couple have already picked out a baby name, and it won’t matter if they’re having a girl or a boy.

“I just want to know [the baby’s gender],” she said, according to People. “And it doesn’t even matter because, honestly, the name we’ve picked, if it’s a boy or a girl, it’s the same name. You won’t guess it. It’s a random name. But it’s not like ‘Blue Jazz.’ It’s not going to be a weird name.”

Clarkson is in full holiday spirit and released her holiday album Wrapped In Red on Oct. 29.