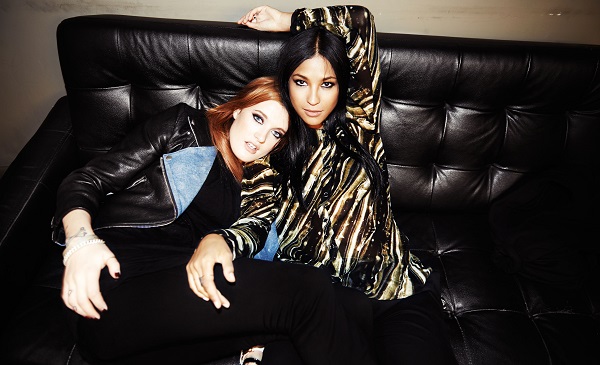 Icona Pop burst onto the American music scene in one fell 30-second swoop when their first big hit, “I Love It (feat. Charli XCX)” played during that amazing summer ShoeDazzle commercial. Now the world is rocking out to their newest album, This Is…, including everyone at SheKnows HQ. We were lucky enough to talk to Caroline Hjelt and, quite honestly, we’re pretty sure the fun-lovin’ babe is the SheKnows spirit animal.

But how did Icona Pop happen? It all started at a party…

“I was very frustrated at that time. I was trying to make it with the music and my love life and nothing was working out. So, I was throwing a lot of parties,” Hjelt says. “One day a mutual friend of me and Aino [Jawo]’s said, ‘Hey, My friend Aino, she’s been stuck in bed for two weeks heartbroken. She needs to have fun, can I bring her to your party?’ And I was like, ‘Of course!’ So she came to my party and it was just love at first sight. We started talking and wound up dancing the whole night. The day after, Aino called me and she came to my apartment, again, and we wrote our first song.”

A few years later and now the girls are circling the globe and performing “I Love It” in front of adoring fans. While that commercial makes most of us equate the song with shopping, it’s actually a breakup song and a violent one at that. So, how do you go from crying your eyes out to writing a tantrum of a song?

“I think when you start realizing that you deserve better and start loving yourself, again, that’s when you become strongest,” Hjelt tells us. “That’s tough, though, everyone will get there eventually. It takes a little bit of time.”

That theme of loving yourself and knowing your strength carries on in Icona Pop’s newest single, “All Night.” Just like the rest of their album, it’s a song that will make you dance, but it’s also incredibly empowering.

“‘All Night’ is really a song about expressing yourself,” Hjelt explains. “It’s about when you’ve been searching to find your crew, your element, your ways. And then you find it. The feeling is amazing and you just wanna stay there all night. It’s such a cool feeling. You can’t really describe it, but you just know it’s right.”

How do the girls like to express themselves? Through music and fashion, obviously. Earlier this year, Icona Pop won an award for most fashionable duo from Swedish Elle. Hjelt believes their fashion and music work together.

“Fashion is an art form as well and I think every art form goes hand and hand. I think it’s a way of expressing yourself,” she says. “I think that’s what we do through the music and, of course, how we dress and everything we do. I think it affects each other very much.”

And what about all this nekkidness? While a lot of pop stars are baring it all, the Icona Pop girls stay fairly covered up. For them, fashion isn’t about showing off skin but showing off style.

“I think it comes down to expressing yourself. If you look back at The Beatles, people were shocked about their haircuts,” Hjelt reminds us. “I think when it comes to music, it’s always been pushing the limits and people will continue to do that, [to find] new ways all the time and right now it’s a lot of naked.”

That doesn’t mean they’re sticklers for covering up, though.

“I don’t mind naked! I think naked can be very beautiful,” Hjelt adds. “We’re naked on our cover. I just think you have to do it for the right reasons and do it your way. I think people can see that and… it looks good. So go ahead and be naked, people!”

There you have it, Icons. You have Hjelt’s permission to get naked. For the sake of everyone involved, we’ll keep our clothes on. But you can can bet we’ll be dancing and expressing ourselves to Icona Pop “All Night” and for a long, long time after.

Author’s Note: I asked and, yes, there is Ikea furniture in their apartment.