Turns out Alaric wasn’t Damon’s first. Bromance, we mean. In true Damon fashion, it didn’t end well. No wonder he has issues! 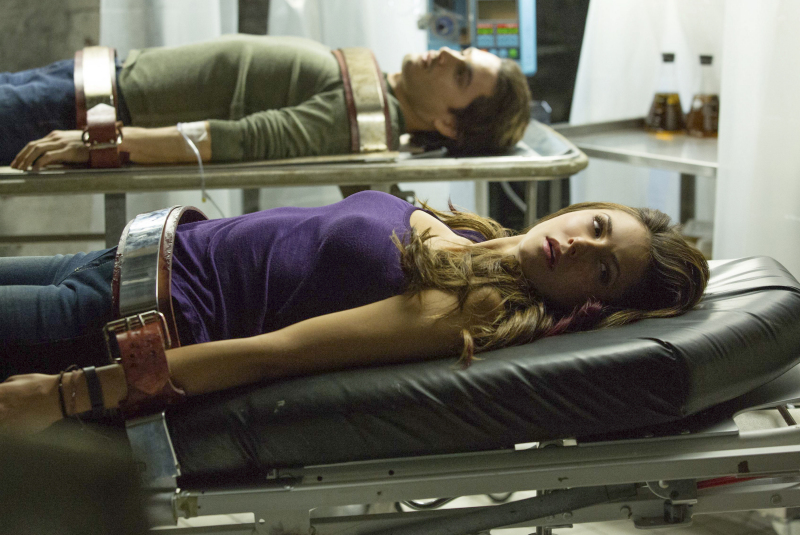 Ever since Alaric died on the show, there’s been an empty place in our hearts on The Vampire Diaries. The good times between the two of them getting drunk and joking about killing people and each other are long gone. Thankfully, tonight’s episode has given us hope that the void may be filled. His name is Enzo, and we wish we had a friend like him.

Turns out, Enzo was actually Damon’s (Ian Somerhalder) friend before Alaric. The two met when they were being held and tortured together by the Augustine Society at Whitmore in the ’50s. Just when Damon was about to switch off his emotions in order to make it through the eyeball poking and organ removing torture, Enzo swooped in with his British accent and dashing grin, encouraging Damon to see the light at the end of the tunnel. The two bonded over their desire for revenge once they escaped from Augustine.

Enzo enacted a plan so the two vampires could escape which involved giving Damon his daily rations of blood so Damon could grow strong enough to spring them both from the cells. It didn’t go as planned. Damon was able to escape but couldn’t free Enzo and had to leave him behind to die. Ouch! Not that we can really blame Damon. The dude didn’t exactly have many options. It was either die together or leave Enzo to die. And it isn’t like Damon made the decision with a clear conscience. In fact, he had to turn off his emotions before he could actually walk away from Enzo.

Damon spills all the details of the above story to Elena (Nina Dobrev) after they both manage to get themselves locked up by Dr. Wes. Oh, and Wes also decides it’s the perfect time to bring Aaron up to speed on all the vampire happenings. Aaron doesn’t take it so well. Especially since he and Elena were really bonding. 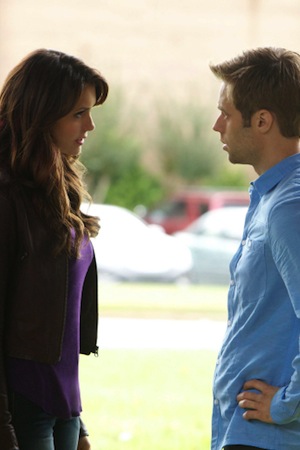 Meanwhile, Katherine and Stefan (Paul Wesley) do some bonding of their own. The new Lexi Caroline (Candice Accola) also tags along in the mission to get Stefan over his PTSD. Their brilliant plan involves playing on Stefan’s need to be the hero in order to break him of his panic attacks. Katherine locks herself with Stefan inside the same safe Stefan was trapped in under water. When Stefan starts to panic, Katherine talks him through it. Stefan panics even more because he thinks when the flashbacks of drowning begin, he’ll accidentally kill Katherine. And he does. For the umpteenth time. Almost. She cups his face in her hands and soothingly tells him she’s there for him. The moment turns from killer to intimate, and our hearts melt.

Then Caroline throws open the safe in the epitome of bad timing. But, the point is, Stefan is over his PTSD. Score one for Katherine! And she does score one. Later that night she and Stefan finish what they started in the safe. Oh, and to make the moment even more perfect, Caroline overhears it all with her vampire senses. Cue priceless expressions and a frantic call to Elena.

A couple that gets vervained together stays together

Aaron’s parents were actually the Whitmores of the Whitmore College legacy and avid members of the Augustine Society. When Damon escaped, after five years of torture and many lengthy revenge discussions with Enzo, he was ready to enact vengeance. Let’s just say, he isn’t OK with the typical revenge model of, “You hurt me, I hurt you.” Instead, Damon plans to hurt the Whitmores for the rest of eternity. He kills every member of the family except one heir. Ever since 1958 he has allowed that one heir to grow up and start a family before he begins the slaughter anew. Aaron is the one Whitmore survivor Damon has allowed to live in the current line.

Not only does Aaron feel betrayed by all of this, so does Elena. She never knew anything about this story. To make things worse, the last Whitmore Damon killed was only a few months ago, over the summer when Elena thought she and Damon were in new-relationship bliss.

Aaron shoots Damon in the head. Yeah, he deserves that one. Just a little.

When Damon wakes up, though, is when the real trouble begins. Elena isn’t in her cell. She’s strapped to a table in Wes’ lab. Oh, yeah, and Enzo is strapped to another table next to her. He’s alive and well. Or as well as one can be after over 50 years of torture.