Nelson Mandela passed away on Dec. 5 at the age of 95, but he left behind a big mark on the world that will be felt for decades or centuries. Figures from around the world react. 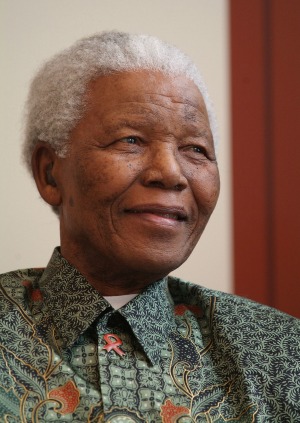 Nelson Mandela died on Thursday at the age of 95. The former South African leader left an impact on both his country and the world. Celebrities, world leaders and other important figures reacted to his passing in many ways, many of them on Twitter.

Morgan Freeman, who played Mandela in the film Invictus, said “Nelson Mandela was a man of incomparable honor, unconquerable strength and unyielding resolve — a saint to many, a hero to all who treasure liberty, freedom and the dignity of humankind,” he said via USA Today. “As we remember his triumphs, let us, in his memory, not just reflect on how far we’ve come, but on how far we have to go.”

Jennifer Hudson, who will be playing Winnie Mandela in the upcoming film about the leader’s wife, also offered her condolences and her thoughts on the change Nelson Mandela made in the world.

President Obama tweeted out part of the speech he gave shortly after Mandela’s death.

Obama met with Mandela earlier this year, after hearing his health was failing.

“He’s a personal hero, but I don’t think I’m unique in that regard. I think he’s a hero for the world,” Obama said at the time. “And if and when he passes from this place, one thing I think we’ll all know is that his legacy is one that will linger on throughout the ages.”

Former President George W. Bush responded, saying, “President Mandela was one of the great forces for freedom and equality of our time,” via the Washington Post. “He bore his burdens with dignity and grace, and our world is better off because of his example. This good man will be missed, but his contributions will live on forever.”

The Clinton family all took to Twitter to talk about their friend, who they knew personally.

U2’s Bono reacted to the news of Mandela’s death by saying, “Mandela played with the highest stakes. He put his family, his country, his time, his life on the line, and he won most of these contests. Stubborn til the end for all the right reasons, it felt like he very nearly outstared his maker. Today, finally, he blinked. And some of us cry, knowing our eyes were opened to so much because of him” (via USA Today).

The singer wrote a long note about Mandela, and both U2 and Bono’s One Campaign tweeted about it.

Media across the world also commented on Mandela’s death, including Barbara Walters.

Virgin’s Richard Branson launched a tribute page to the leader with photos and quotes from his life.

“Today we lost not only a great man; we also lost one of the world’s greatest leaders,” Branson wrote on the site. “Everyone will have been impacted by Nelson Mandela in their own way — these are my personal reflections on the time I was fortunate enough to spend with him.”

Wyclef Jean took the opportunity to post an old video of him performing on Nelson Mandela Day, and reminded his fans of the cause they are both passionate about.

Numerous other world figures, and regular people, tweeted about Mandela’s death. While so many people are grieving for the loss of such a great man, many are also remembering what can be learned from his life.