The world is left in mourning at the announcement that one of the world’s greatest and most respected men, Nelson Mandela, has sadly passed away today. 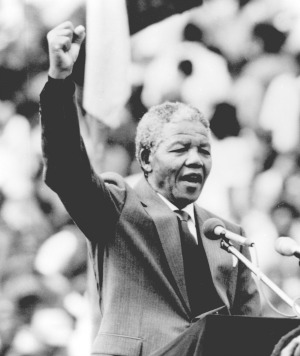 One of the world’s greatest leaders and hero to many South Africans, Nelson Mandela has sadly passed away today at his home in Houghton, South Africa.

Mandela was South Africa’s first black president and a key figure in helping to pave the way for a democratic and united nation.

Mandela’s defiance and heart saw him endure 27 years in jail for his fight against apartheid and when he finally emerged a free man, his spirit remained unbroken and his heart was still filled with compassion and understanding.

With a heavy heart, South African President Jacob Zuma announced the news in a statement on national TV saying that Mandela had died at age 95.

“My fellow South Africans, our beloved Nelson Rolihlahla Mandela, the founding president of our democratic nation, has departed.”

“He passed on peacefully in the company of his family around 20h50 on the 5th of December 2013. He is now resting. He is now at peace. Our nation has lost its greatest son. Our people have lost a father.

“Although we knew that this day would come, nothing can diminish our sense of a profound and enduring loss. His tireless struggle for freedom earned him the respect of the world.

“His humility, his compassion and his humanity earned him their love. Our thoughts and prayers are with the Mandela family. To them we owe a debt of gratitude.

“They have sacrificed much and endured much so that our people could be free.”

The news comes after Mandela, who is more fondly referred to as Madiba, the nation’s father, had been battling a number of serious health complications, including repeated hospitalizations for a chronic lung infection.

The world had originally feared the worst back in June when Madiba was hospitalized for over three months for a lung infection. However, there was a collective sigh of relief when he made an unexpected and miraculous recovery and was able to return to his home where he continued to receive intensive care.

Mandela leaves behind an inspirational legacy. A man filled with forgiveness and determination, he managed to unify a divided society and form a beautiful, diverse rainbow nation.

Madiba was awarded the Nobel Peace Prize in 1993 for his work in dissolving apartheid, but that was only a fraction of the admirable work that he dedicated his life to, including continuous peace talks and dedication to children’s charities.

Mandela’s life has inspired many people, including actor Idris Elba who stars as the apartheid icon in the forthcoming film Mandela: Long Walk to Freedom. The 41-year-old actor shared his admiration for Mandela in a statement.

Elba said, “What an honor it was to step into the shoes of Nelson Mandela and portray a man who defied odds, broke down barriers and championed human rights before the eyes of the world. My thoughts and prayers are with his family.”

Another influential figure to lend his voice to Mandela’s passing was Harvey Weinstein, who said, “One of the privileges of making movies is having the opportunity to immortalize those who have made a profound impact on humanity. We count ourselves unspeakably fortunate to have been immersed in Nelson Mandela’s story and legacy.

“It’s been an honor to have been granted such proximity to a man who will go down as one of history’s greatest freedom fighters and advocates for justice. I have had the privilege of spending time with President Mandela and I can say his sense of humor was as great as his optimism.

“We are deeply saddened by his loss; our hearts go out to his family and the entire South African nation.”

U.K. Prime Minister David Cameron has also felt the loss of a great man and said of Mandela, “a great light has gone out in the world.” We can only agree with him.

Mandela will be remembered fondly for his passion and determination to bring equal rights to all the people of South Africa. He leaves behind an incredible legacy and will live on forever in the hearts of people around the world.

Our thoughts are with Mandela’s third wife, Graça Machel, three children, 17 grandchildren and 14 great-grandchildren. May his soul rest in peace, but his memory rest within our hearts.