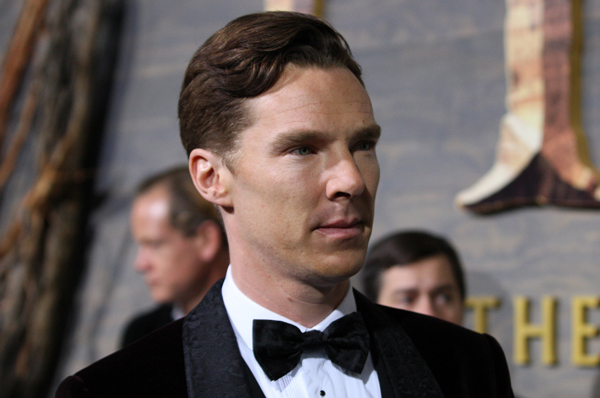 Giving viewers an extra treat, Benedict Cumberbatch put a very British touch on “Genius” by R. Kelly when he appeared on the Jimmy Kimmel Live! show on Wednesday.

The Star Trek Into Darkness star gave a superb performance, sitting on a bar-style stool and wearing an elegant suit without a tie. As he recited the lyrics, Cumberbatch sported a serious, seductive look, although a knowing smirk couldn’t help but escape his lips.

The versatile British actor has proven time and again that he can play a huge array of different characters in film, and becoming a sultry R&B singer is no exception.

“Bodies so…. freaking soft, I can’t wait to turn you on,” Cumberbatch recited with his unavoidable accent. “You got me… like [pause] la, la, la, la, la. Baby, is how you make me feel, baby.”

He then concluded with, “Go to sleep and when we wake up, I’ma hit that thing again.” With that Cumberbatch turned to the side, looked into the camera and winked. “Promise.”

Aside from that awesome performance, the Golden Globe nominee also spoke to Kimmel about his new movie The Hobbit: The Desolation of Smaug, where he plays the voice of the titled dragon. Plus, he praised his beautiful mom, and told of how someone on set embarrassingly revealed they had the hots for her. Then he added how he’s been such a big tourist in Los Angeles.

“I came out of the airport and turned into a complete sort of British cliché,” Cumberbatch said, explaining a previous trip he took with his girlfriend to promote a film a few years ago. “I got the Mustang convertible and stayed at a hotel on the Strip and was just driving around saying, ‘Yeah, this is cool.'”

Check out Cumberbatch’s sultry British version of “Genius” in the video below: