Kanye West surprisingly escapes the wrath of former Oasis frontman Noel Gallagher in a new interview, but not everyone is so lucky. 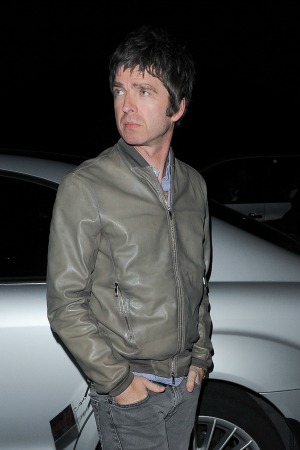 Noel Gallagher famously hates everyone, including his own brother, so it’s no surprise to hear him unleash his negativity on huge pop acts like Miley Cyrus, Lady Gaga and Arcade Fire. However, when it comes to the one person everyone else loves to hate, the former Oasis frontman is shockingly generous with his praise.

In an interview with Rolling Stone, Gallagher was blunt about his likes and dislikes of 2013, and had nothing but praise for Kim Kardashian’s baby daddy.

“…Somebody told me to watch this interview he did in England, so I watched it, and I thought it was one of the best interviews I’ve ever seen. I f****** loved it! Especially the bit about the leather jogging pants or whatever he’s going on about, f****** claiming he invented them.”

But before you get too excited about this kinder, gentler Gallagher, read what he has to say about Miley Cyrus, Lady Gaga and Arcade Fire.

“I think there’s a trend, unfortunately, in the game, at the minute, of girls desperately trying to be provocative or desperately trying to… ‘start the debate’ about some old s*** or other,” he said of Cyrus. “Because, really, they’re not very good. Do you know what I mean? We have it in England regularly, and you have it in the States. I feel bad for ’em. It’s like, ‘Write a good song. Don’t make a provocative video — write a good f****** song. That’ll serve you better, I think.’ She was on TV recently, Miley Ray Cyrus, and it was just like, ‘What the f*** is all this about?'”

“Lady Gaga for me is all about that first album, because my daughter and my wife loved it,” he continued. “I’ve never heard of her since. What does that say? That speaks volumes, to me. She’s another one. In fact, she’s probably doing a s*** on top of a boiled egg right now. And somebody will f****** freeze it and call it art.”

As for Arcade Fire, “Anybody that comes back with a double album, to me, needs to pry themselves out of their own a******,” he opined. “This is not the Seventies, OK? Go and ask Billy Corgan about a double album. Who has the f****** time, in 2013, to sit through 45 minutes of a single album? How arrogant are these people to think that you’ve got an hour and a half to listen to a f****** record?”

Read the complete interview with Noel Gallagher on RollingStone.com.