Zoe Saldana is one celeb who remains tight-lipped about her personal life. In fact, she’s so good at keeping secrets that it’s taken six months for her to finally spill the beans on her wedding… 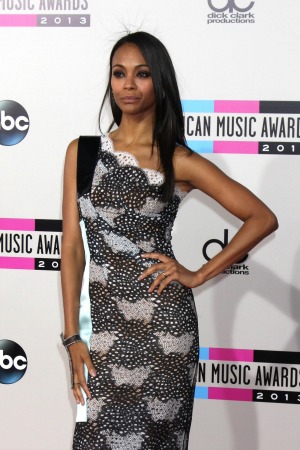 The beautiful and talented Zoe Saldana has finally confirmed that she is, in fact, married to her beau Marco Perego.

It may have taken six months for the Avatar actress to confirm the news, but Jimmy Kimmel has a way of getting the information that we want to hear.

The star appeared on Jimmy Kimmel Live on Tuesday and finally revealed the details of her secret wedding.

Kimmel started by saying, “Congratulations! You got married since the last time I saw you.”

To which Saldana responded, “I did. Thank you, thank you. And congratulations to you, too. You got married.”

You’ll most probably remember that Kimmel married to love, Molly McNearney, during a lavish ceremony back in July.

The talk show host then responded to his guest by saying, “Thank you. It’s not a competition, though. We don’t need to just go around getting married.”

“I got married in Ojai, which is about an hour away from here.[Los Angeles] It’s in the desert. And you?”

The pretty brunette replied, “I got married in England. I did it in England. Can you top that?”

This playful banter finally led to the confirmation of the rumors that have been circulating for months… Saldana married her artist boyfriend in June, whom she has known for years.

The couple had managed to keep their relationship a secret and first went public in May, but an insider told Us Weekly that they had “known each other for a long time” and “have great chemistry.”

Kimmel continued the conversation, only to admit he could not top the Star Trek Into Darkness actress’ wedding destination but was pleased for the details to be confirmed.

A source also previously told Us Weekly about the couples wedding day, saying, “It was super small but very romantic and beautiful.”