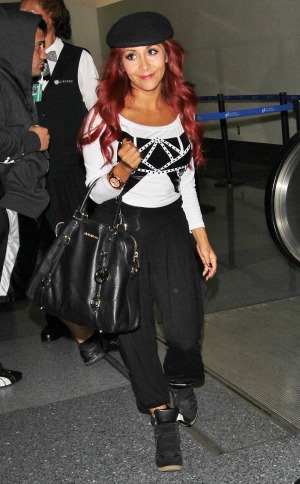 Former Jersey Shore star Snooki is no stranger to wild behavior and fans of the hit reality show were witnesses to her strange antics on more than one occasion.

Thus, it makes sense for her to want her new best friend to be none other than Miley Cyrus.

The “Wrecking Ball” hitmaker has been topping the charts and has managed to get everyone talking about her about her barely there outfits and her twerking skills.

Yet Snooki, whose real name is Nicole Polizzi, has noticed similarities between herself and the 21-year-old singer.

The 26-year-old reality star has since moved on from her partying past, after meeting her fiancé Jionni LaValle, and the couple share a beautiful little son, Lorenzo, together. However, she’d still like to give the “We Can’t Stop” singer some advice… oh, and some sex toys!

In an interview with Celebuzz, Snooki revealed what she’d like to get Cyrus as a Christmas present, saying: “I would buy her a best friends bracelet because I feel like we would be best friends.”

The Snooki & JWOWW star added, “Even though she’s crazy and a party girl. She’s me basically three years ago. That’s why I love her. I know exactly what she’s going through. The girl just wants to have fun and she’s having fun.”

“I feel like I would get her a lot of Christmas presents that involve vibrators, some sex toys, and go to a stripper store and buy really hot stripper outfits. Because she loves being naked, and I love seeing her naked because she’s hot. I think she’s really hot.”

Snooki was clearly excited as she reminisced about all the things she herself would have loved for Christmas three years ago and continued the list of potential presents for Cyrus.

She added, “I would buy her some tight pleather pants and a spiky bra Madonna style. She could walk around like that. She could twerk on Santa. Whatever she likes to do, she can do because she’s Miley Cyrus.”

What do you think would be the perfect Christmas gift for Cyrus?