The British actress plays the lead role of Emanuel, a 17-year-old girl whose first line of dialogue is, “I murdered my mother,” and the movie gets even darker and more surreal from there! We sat down with Kaya Scodelario to find out more about playing this troubled teen and working with the lovely Jessica Biel. 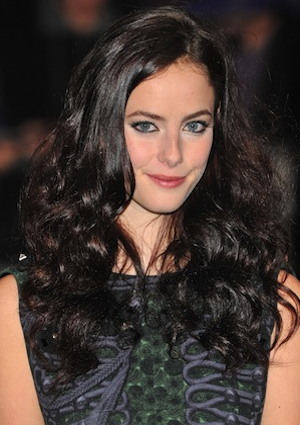 Despite the masculine spelling of her name, Emanuel (Kaya Scodelario) is a 17-year-old girl with a terrible burden. Her mother died giving birth to her, so Emanuel’s impending 18th birthday is not going to be a happy occasion.

We wanted to know what drew Scodelario to this complicated yet feisty character and she admitted to having an “interesting” relationship with her own mother.

“She raised me alone and she suffered depression most of her life. It can be very dark, very difficult, especially as a teenager. Sometimes you can hate the woman you love and you don’t know quite what is going on. I think that’s Emanuel’s journey, she’s never had that and she wants that.”

Emanuel’s life becomes particularly complicated when a woman named Linda (Jessica Biel), and her infant daughter Chloe move into the house next door.

Emanuel quickly discovers that Linda is living in a complete fantasy world. But instead of exposing her fragile neighbor, Emanuel plays along.

When we asked the raven-haired actress why Emanuel would so willingly enter Linda’s bizarre game, she told us, “[Emanuel’s] quite lost in the world, she doesn’t have any ambitions. When Linda comes along, she just wants to protect her and that’s why she kind of goes into her insane world.”

We don’t want to give away too much about the plot, but a hyper-realistic baby doll plays a significant and disturbing role. We asked Scodelario if the baby doll freaked her out.

“Oh my gosh, so much! The freakiest part about it, is that the doll is made to be the same weight as a real baby and the head isn’t supported so you have to hold it like a real baby. In between takes, you’d kind of feel yourself rocking back and forth, stroking the head and instinctually treating it like a real baby. I had to put her down.”

Scodelario also told us that, at one point, the doll became wet and needed to dry out before they could film the next take. They laid the doll on the sidewalk to dry in the sun — much to many strangers’ horror.

“Everyone was walking past saying, ‘That’s a baby, what are you doing?’ So we had to put a sign next to it saying it was a doll.”

December movie picks brought to you by SheKnows >>

We asked Scodelario what it was like to work so closely with superstar Jessica Biel. “I was really worried at first, this was my first American project and I had all these images in my head of what it was like, the celebrity culture,” she admits.

But the former Skins actress soon realized she had nothing to worry about. “From the second I met Jessica, she was a normal person, she has no airs or graces about her and she’s extremely professional. She connected with me. She gave me advice, made sure I wasn’t feeling lonely. She was wonderful.”

We had to ask: did Justin Timberlake visit the set? Scodelario sighed and said, “No, he didn’t. Everyone was waiting every single day but unfortunately, it never happened.”

So what’s next for Kaya Scodelario? She’ll be starring in a new movie called The Maze Runner, which is a film adaptation of the YA book of the same name, written by James Dashner. Look for that in September 2014.

The Truth About Emanuel opens in limited release on Jan. 10, 2014. The movie is also currently available on VOD and iTunes.