Justin Bieber makes out with a sexy blonde in his just released music video for the “All That Matters” single. 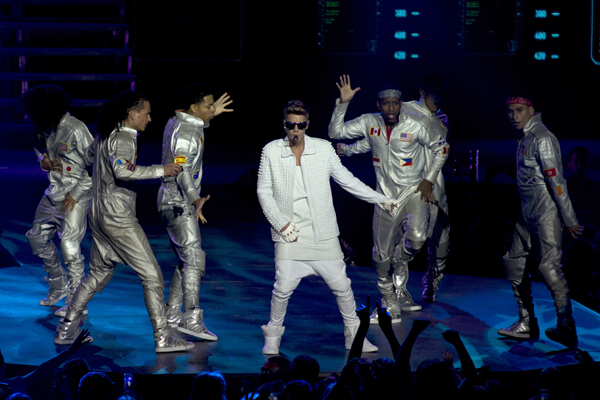 The video for Justin Bieber‘s new single, “All That Matters,” was just released and features the teen idol making out and getting racy with a sexy blonde.

The video begins with Bieber simply singing for the camera as the blond girl stands nearby looking pretty. Then, a few clips show the singer getting closer to her, but not making any contact. Next, the Biebs is seen just barely touching her face, but without any contact yet as the girl is simultaneously shown making solo, sexy poses on a wall.

Ultimately, Bieber continues creeping up on the girl and starts to kiss her as the pair go on to have a heavy-duty make-out session in slow motion. Of course, during the video, Bieber made sure to take off his shirt again and show his newly developed muscles to the viewers. The pop prince is also seen doing some sort of pelvic-thrust move as he dances solo on a few quick shots of him as he sings.

The song is a slow ballad and it’s not half bad, being a long-shot away from the recent rap-ish tunes he’s been churning out.

Taking to Twitter, Bieber explained the meaning behind “All That Matters,” saying that it is all about love.

“The lyrics of this song are pretty self-explanatory — when you fall in love with someone, that someone can make you feel whole,” Bieber wrote. “I feel like anyone who has been in love knows what I mean. The song conveys that being in love is one of the greatest feelings on earth. Love is all that matters. But the void you feel when that love goes away is gut-wrenching.”

The 19-year-old Canadian singer added that he worked very hard on the song, saying that “trying to put that feeling into music was extremely important,” to him.

Check out the video for “All That Matters” below: