A whole lot of stuff went down in the Supernatural fall finale “Holy Terror.” Lives were lost, lies were discovered and a couple characters will find themselves in entirely new situations when the show returns in January 2014. 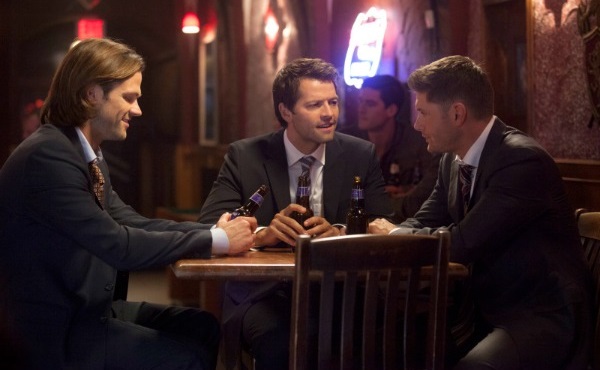 In the Supernatural Season 9 mid-season finale “Holy Terror,” a whole lot of stuff went down. It’s not unusual for a fall finale to have many stories happening at once, but with three major story developments, it’s almost hard to figure out which is the one that will have the most impact on the rest of the season.

Holy smokes! We talked with Misha Collins about his lack of wings and didn’t faint >>

Warning: Major spoilers ahead for Supernatural “Holy Terror.” You have been warned.

The biggest moment that came during the episode was no doubt the loss of another honorary Winchester. Kevin Tran was more than just the geeky Prophet who was helping Sam and Dean decipher the Angel Tablet. He had become a pseudo-brother and another soldier in their war against evil. His death will mean the loss of a friend, but also the loss of the one person who could figure out what those pesky Tablets said. Without him, the boys will have to rely on Crowley (Mark Sheppard) for help, and who knows where that could lead.

Another huge moment in the episode came when Castiel (Misha Collins) decided that desperate times called for desperate measures. Castiel killed another angel and swallowed their grace to replace his own. We at SheKnows posted a poll asking if Castiel should remain human and while it seemed likely that he would get his wings back, it didn’t seem as though it would happen quite like that or that fast. The consensus among the fans was that Cas would stay wingless for a while longer as he was just beginning to understand what it means to be a human. But at the beginning of the episode, Castiel appeared to have decided that it was time to get back into the fray and the only way to do that would be to be at full power.

Put on a diaper: The Supernatural Season 8 gag reel will make you pee your pants >>

At this point in the series, Jared Padalecki must be getting pretty good at playing other people possessed in Sam’s body. He’s been a demon, a teenage boy, Lucifer himself and now Gadreel. Had Metatron not come along and offered Gadreel a place in his new-and-improved Heaven, chances are Gadreel might have simply healed Sam and moved on. He did seem like he just wanted to make up for his past failures, but it’s hard to resist a carrot like the one that Metatron put in front of him. One scary thing Gadreel said was that there was no more Sam. Does that mean that Sam Winchester isn’t in there at all or was Gadreel just making a point that he was in charge full-time now?

Some may argue that Dean (Jensen Ackles) still doesn’t have his own story line (and we had so many great ideas!) this season and sadly, I may have to agree with that assessment. What he does have, though, is a lot on his plate to deal with now that Kevin is dead and Sam’s meat suit is being controlled by an angel in cahoots with Metatron. While it’s true that nothing is really happening to Dean per se, he is still the only one left to fix everything that went wrong. Now that Sam has been snatched away by Gadreel, hopefully Dean and Castiel will work together. At this point, Cas is all that Dean has left, except for a blood-addicted demon locked up in the dungeon. So while there may be no “Dean story” right now, his is probably the most exciting journey to come in the rest of the season.

What did you think of the Supernatural Season 9 mid-season finale?

Want more TV news? Sign up for our newsletter and you’ll be possessed obsessed >>