Tom Daley has never been happier in his relationship with a man, and if the rumors are true then that man is a talented Hollywood screenwriter, more than twice his age. 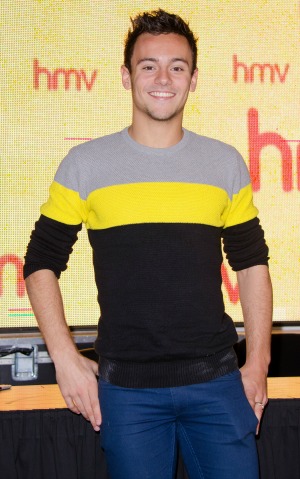 The news broke on Monday that talented Olympic diver Tom Daley is bisexual, when he courageously and candidly chose to share his sexual orientation with his fans via YouTube.

During his outing Daley also revealed that he’s currently in a relationship with a man, and he’s “never been happier.”

Daley said, “In spring this year, my life changed massively when I met someone and they made me feel so happy, so safe and everything just feels great, and that someone is a guy.”

“It did take me by surprise a little bit. It was always in the back of my head that something like that could happen, but it wasn’t until spring this year that something just clicked.”

“It felt right and I thought, ‘OK,’ and my whole world changed there and then.”

Now, if rumors are to be believed, the man in question is Dustin Lance Black. It’s believed that Black, who is a talented Hollywood screenwriter and previously won Best Screenplay for his movie Milk—a heartfelt film about the first gay man elected to public office in California, Harvey Milk—and Daley are in a serious and committed relationship.

Black is a respected man and during his emotional acceptance speech, the 39-year-old film industry figure showed the world his courage by saying, “When I was 13 years old, my beautiful mother and my father moved me from a conservative Mormon home in San Antonio, Texas, to California — and I heard the story of Harvey Milk.”

The 19-year-old British athlete is just half Black’s age but according to a source who revealed the details to The Sun newspaper, the couple is not worried about the age difference.

The source revealed, “He’s besotted with Dustin. They love each other and aren’t concerned what anyone says about age difference.”

“Dustin is very proud of Tom for making such a powerful statement about his sexuality — it’s what he believes in doing. Dustin has given Tom the confidence to be himself. He’s in awe of him and proud of him. He no longer minds people knowing they are together.”

Daley and Dustin were pictured getting coffee at The Coffee Bean & Tea Leaf in Hollywood last week, according to website Queerty.

While there is currently no confirmation yet from either Black or Daley’s reps, if the news is true then congratulations to the happy couple!