Nigella Lawson is defending herself against claims she is a drug addict who can’t control her own empire. 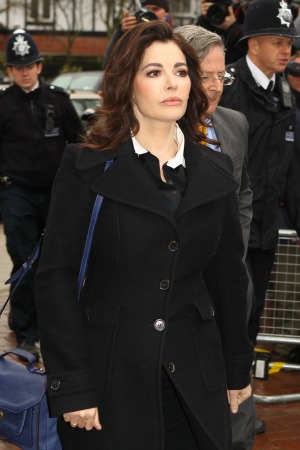 Nigella Lawson is finally telling her side of the sordid tale about the end of her marriage, spousal abuse, those nasty drug allegations and what really went on behind closed doors — and her ex is not exactly coming out smelling like roses.

The celebrity chef told a jury that the allegations she is a drug addict against her were entirely made up by her ex-husband and her former assistants, who are being accused of embezzling tons of cash from their former boss. But — and there’s a big but — she did admit to using cocaine in the past a few times.

“I have never been a drug addict,” Lawson said. “I’ve never been a habitual user. There are two times in my life when I have used cocaine,” explaining she took the drug when her first husband was dying, and again in 2010 during a “very, very” difficult time in her marriage to Charles Saatchi.

“I felt subjected to intimate terrorism by Mr. Saatchi,” she said. “A friend of mine offered me some cocaine. I took it… The idea that I am a drug addict or habitual user of cocaine is absolutely ridiculous.”

“I concluded that I did not have a drug problem, I had a life problem, and I needed to attend to that and I did seek out a therapist.”

Lawson relayed a conversation she had with Saatchi after their marriage broke up when photos emerged of him choking her at a London restaurant.

“He had said to me that if I didn’t go back to him and clear his name he would destroy me,” Lawson told the jury. “And so he started spreading allegations of drug use, particularly that awful incident at Scott’s. And I felt that his way of getting these out was to use this case. And in September a new defense statement came out with some of the drug allegations, which Mr. Saatchi had mentioned to me in August.”

“I said ‘What drug allegations?’ I said: ‘There aren’t going to be any.’ These allegations appeared in a PR blog that he had been dedicated to salvaging Mr. Saatchi’s reputation and savaging mine.”

Lawson explained that her ex orchestrated a deliberate smear campaign to ruin her career in retribution for leaving him — just another of his abuse techniques.

“They had been circulated on the internet, witness statement that would go to court and sent to every media outlet. I felt that this would not become a fraud case and I would be put on trial, and that is what has happened. I have been put on trial here in front of the world and forced to answer, and I’m happy to answer the allegations, in front of the world’s press.”

“And it comes after a long summer of bullying and abuse and I found it just another chapter in that chapter.”

The couple split in July.

Lawson also expressed her dismay at the behavior of her former assistants, sisters Elisabetta and Francesca Grillo, who stand accused of fraud for using the chef’s credit cards to purchase more than $1.1 million worth of luxury goods for themselves.

“It’s very difficult when you find out that someone you have loved and trusted could behave that way,” she said. “In my heart of hearts I do not believe Lisa to be a bad person. I believe her not to have a very strong moral compass.”