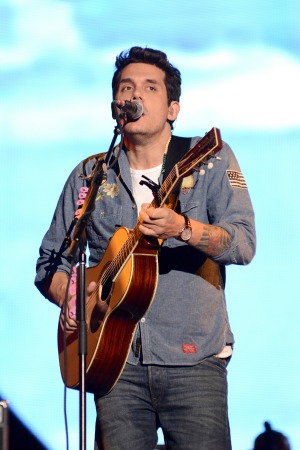 Katy Perry and John Mayer are one of the hottest Hollywood couples around right now, and their relationship just got hotter as they unveiled their latest artwork for their duet “Who You Love.”

The swirling rumors of engagement may not yet be confirmed, but a musical collaboration is certainly taking their relationship to the next level.

The couple have been dating on and off since August 2012, following the “Roar” hitmaker’s divorce from comedian Russell Brand last year.

And the musician asked his girlfriend to be a part of his much anticipated sixth studio album titled Paradise Valley, which was released in August.

Mayer is certainly pleased with the work he and Perry have produced and shared his joy with fans via Twitter.

Attached to the tweet was a treat for fans, the couple’s first portrait together, the cover art for the track.

The artwork can be attributed to the skills of photographer Mario Sorrenti and shows the couple in a black and white shot with Mayer strumming his guitar and Perry looking gorgeous and lying above him on a velvet couch, while lovingly touching her beau’s shoulder.

Mayer shared another tweet with his adoring fans, saying, “Behind the scenes of JM & @katyperry’s #WhoYouLove photoshoot. Our Ship Of Feels is lost in a sea of happy.”

The “Gravity” singer also wrote in a post on his Tumblr: “I’m excited to give you the first look at the single artwork for ‘Who You Love,’ shot by the great Mario Sorrenti. Get it at the iTunes Store, and then head over to Vanity Fair to see exclusive photos from the shoot.”