Justin Timberlake shines without overshadowing in the upcoming movie, Inside Llewyn Davis. Full of great music and fantastic actors, it’s a film sure to become a favorite of music and film fans alike. 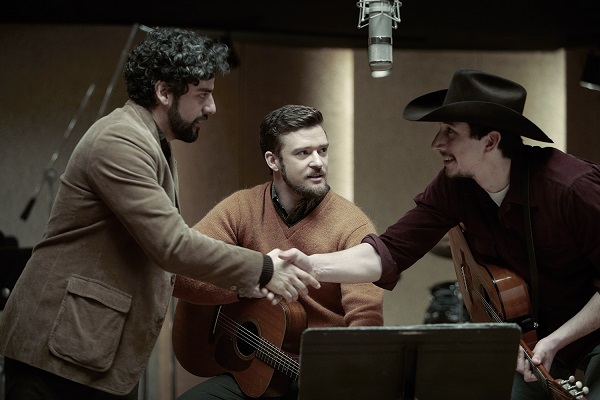 We’re not sure what to be most impressed with when it comes to Inside Llewyn Davis: The movie or its phenomenal soundtrack. Perhaps the most shocking part of Inside (and certainly what will pull in the viewers) is Justin Timberlake‘s performance as a folk singer. Whatever pulls you to select theaters to see Inside Llewyn Davis or entices you into buying the album, we highly recommend you go for it.

This isn’t Timberlake’s first foray into film, just his most surprising. We’re used to a slightly amped up version of Timberlake. Whether he’s in an action flick or a rom-com, he’s usually a ball of fierceness and energy. For Inside, he’s a much more laid-back version of himself. And, of course, the sexy pop music he’s known for is also out the window for this one. Instead, he’s a semi-talented folk singer living in Greenwich Village in 1961.

He’s not the main character, though. Just the most famous of supporting actors.

Inside Llewyn Davis‘ lead belongs to Oscar Isaac who, despite his familiar face, is actually a relative unknown. His biggest blockbuster role thus far has been as Outcome #3 in The Bourne Legacy. He slips so perfectly into Llewyn Davis, however, he’s certain to see a lot more scripts falling through his mail slot.

December movie picks brought to you by SheKnows >>

The movie follows Davis as he navigates his way through one week in the New York City folk scene emerging in the early ’60s. The title role is loosely based on the life of Dave Van Ronk, a talented folk singer from the era whose efforts are nearly always overshadowed by the likes of Bob Dylan, Joni Mitchell and all.

The talent doesn’t just light up the screen, though, it’s also well-represented in the soundtrack. The Inside Llewyn Davis soundtrack is littered with the best and brightest voices in the business. Isaac’s warm and beautiful voice is present on nearly all songs, but he’s also often harmonizing with Timberlake or Mumford and Sons’ frontman, Marcus Mumford, who served as co-producer. Mandolin virtuoso Chris Thile and his band Punch Brothers also sit in on numerous tracks. You’ll even hear the voice of Carey Mulligan (The Great Gatsby) who stars in the film alongside Isaac and Timberlake. And, yes, there’s a song from the ever present folkster Bob Dylan, as well as the film’s inspiration, Van Ronk.

Want more movie news? Our newsletter has your back! >>

Already having won multiple indie film awards, Inside Llewyn Davis opens in theaters on Friday, Dec. 6, and should afford big award show nods to Isaac, Timberlake and Mulligan as well as The Coen Brothers and Mumford.