Kate Middleton stepped out in a glittering diamond tiara tonight for the first time since donning one for her historic royal wedding. 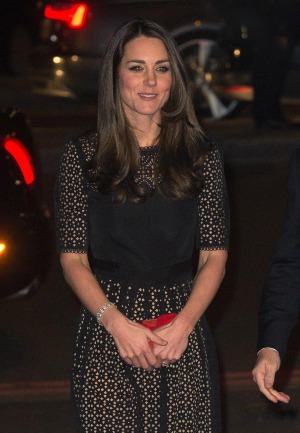 It’s the moment we’ve been waiting for, for a long, cold two-and-a-half years: Kate Middleton is finally, finally wearing a tiara again!

The Duchess of Cambridge has not been spotted with jewels on top of her head since walking down the aisle at Westminster Abbey, but on Tuesday night she popped on a gorgeous delicate fanned piece to celebrate the Diplomatic Reception at Buckingham Palace.

Off with his head! Kate betrayed by hairstylist >>

Photographers got a quick peek at the Duchess arriving for the event in a chauffeur-driven Bentley. Since it is a private party, we are unlikely to see any photos from inside or of Kate’s complete look, but you can catch a glimpse of her fabulous headgear over at WhatKateWore.com.

The Palace confirmed that Kate was wearing the Lotus Flower Tiara, a piece that belonged to Princess Margaret, the late sister of Queen Elizabeth, given to her by the Queen Mother. The piece was made from a necklace that was a wedding gift from George IV. It is also known as the Papyrus Tiara.

According to the Royal Order of Sartorial Splendor, authority of all things sparkly and royal, the headpiece is “a delicate diamond tiara of fanned motifs crowned by floating diamond arches and studded with two pearls at the base and a central top pearl.”

While the Queen Mother wore the piece low on her forehead as was fashionable in those days, Kate wore it in the traditional position on her crown. She wore her hair half up, half down to show off the piece along with her coordinating diamond drop earrings, also on loan from the queen.

Prior to Kate donning it tonight, the tiara was last seen atop the head of Serena Stanhope at her wedding to David Armstrong-Jones, Viscount of Linley and son of Princess Margaret.

While some of Princess Margaret’s jewels were sold off in 2006 after her death, Queen Elizabeth retained this special item.

Even if Kate had wanted to wear the Halo Scroll to the Diplomat’s Reception she would not have been able to, as it is currently part of the Cartier: Style and History exhibit at the Grand Palais.