Chris Hemsworth’s kiss with Natalie Portman at the end of Thor 2 was so passionate, it was hard to believe it was acting. But it turns out, it was as real as it gets. 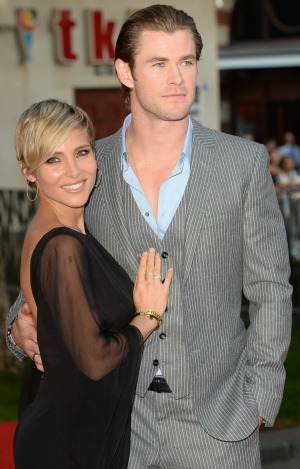 If you thought the kiss at the end of Thor: The Dark World between Chris Hemsworth and Natalie Portman was a little too passionate to be acting, you were probably right. Portman reportedly told the New York Daily News she wasn’t in the scene at all.

So who did Hemsworth end up kissing? It looks like it was his own wife.

But the on-screen kiss had nothing to do with any jealousy by Hemsworth’s wife — it was simply based on convenience.

“It was for reshoots [after the film was finished] and he was working in Hong Kong and I couldn’t get there because I was working on my own film,” Portman told the newspaper.

The scheduling conflict left few choices for how the kiss would be accomplished, and Hemsworth’s wife Elsa Pataky stepped up for the task.

“And so they put his wife in my wig and costume,” Portman said. “That’s why it was so passionate.”

Pataky has been married to Hemsworth since 2010 and just announced she is pregnant with their second child. Their first child, India, is only 18 months old, but will soon have another sibling.

“She’s the best!” Hemsworth recently said about his daughter. “It makes it harder to leave and go to work. I enjoy being at home a lot more than I ever have.”

It looks like they are trying to travel together as much as possible. The family — Hemsworth, Pataky and their daughter, India — were all in Hong Kong when the reshoot needed to take place.

5 Things to know before seeing Thor: The Dark World >>

“It was such a perfect solution, wasn’t it?” Portman added.

Both Hemsworth and Portman went their separate ways after filming, and are still as busy as ever. Hemsworth is currently filming The Avengers: Age of Ultron, and Portman is working on at least three projects.