Did Terrence Howard walk down the aisle again? His reported new bride would be wife No. 4. 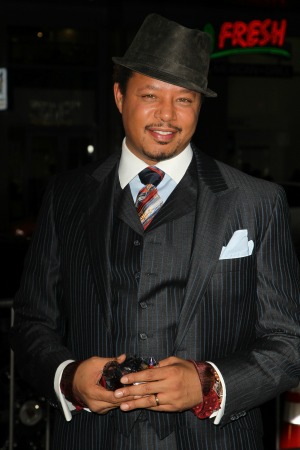 Is Terrence Howard a married man again? All signs point to the affirmative after he was spotted on the red carpet in early November wearing a wedding ring.

RadarOnline is reporting that The Best Man Holiday star secretly married a Canadian woman named Miranda after only one month of dating. If the rumor is true, this is Howard’s fourth marriage.

The 44-year-old Oscar nominee made news in early August when he was accused of beating his third ex-wife Michelle Ghent throughout their two-year marriage. She said he also “sucker-punched” her during a trip to Costa Rica.

Even with that abusive past, a RadarOnline source claims the two former spouses are still in contact.

The insider shared, “Terrence called up Michelle to tell her about the marriage and taunt her about it. She needs to cut him off for good.”

There is very little information about the actor’s new bride, but he is reportedly introducing her to family and friends. He even brought Miranda to the premiere of The Best Man Holiday in Los Angeles.

While the gossip site wasn’t able to confirm the news with the star’s representative, a friend close to the actor seemed to chuckle about the news since it was “not out of character.”

The second source revealed, “It’s another one of his outlandish moves… he only knew and/or dated her for about a month!”

His friends clearly expect the unexpected from Howard. Let’s just hope the newlyweds like each other after the newness wears off.