What kind of music would they listen to in a post-apocalyptic U.S.? Rock ‘n roll, of course! 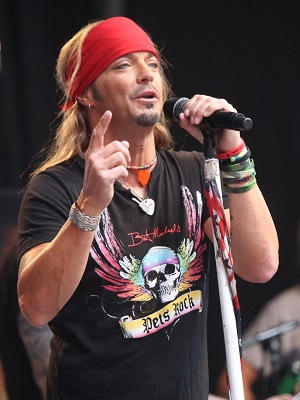 NBC announced a little stunt casting for its hit show Revolution this afternoon. Bret Michaels will be guest starring as a post-apocalyptic version of himself on an episode that will air sometime in 2014. He’ll be singing an acoustic version (duh) of “Every Rose Has Its Thorn.”

Revolution theories: Who is Monroe’s son? >>

Via press release, Eric Kripke, creator and executive producer of Revolution said “Bret is truly a great guy. I’m a huge fan of his music and I’m thrilled he’s appearing on Revolution.”

Michaels rose to fame with his band, Poison, alongside other rock bands who settled on the Sunset Strip in the late ’80s and ’90s such as Mötley Crüe, Guns N’ Roses and Cinderella. Michaels has maintained his celebrity by appearing on several reality television shows, including Rock of Love with Bret Michaels and Celebrity Apprentice.

Bret Michaels calls off his engagement >>

It’s about time Revolution lightened up a little, isn’t it? After getting off to a pretty phenomenal start this season, it’s been weighed down with so much death and despair the people need a break. It looks like they’ll get their wish.

There’s no indication of exactly how Michaels will turn up on Revolution — whether he’ll just be walking through town or if there will be an actual concert of sorts. It would be fun to see some character interaction though, wouldn’t it?

Picture Miles (Billy Burke), Rachel (Elizabeth Mitchell) and Monroe (David Lyons) not only knowing of Bret Michaels, but at least one of them having run into him in the past. They were the cool kids, right? With the way they dress, they’ll make Michaels feel right at home.

One burning question remains: Do they have guyliner in post-apocalyptic U.S.?