The Victoria’s Secret Angels have always been hot and sexy, but this year they are doing a little dancing and lip-synching to promote their show. 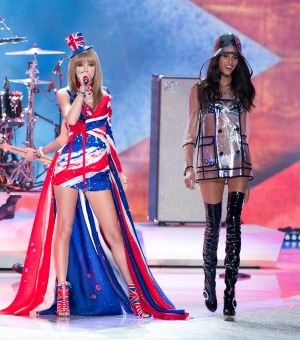 Each year, the Victoria’s Secret Fashion Show is a must-see in December. The hottest VS Angels are featured walking down the runway in the lingerie company’s latest fashion line along with a few exclusive and expensive pieces.

This year, the show airs on Dec. 10 on CBS with favorite supermodels like Alessandra Ambrosio, Candice Swanepoel, Adriana Lima, Doutzen Kroes and Behati Prinsloo. To promote the show and the special musical guest, the Angels created a video that’s going viral.

Taylor Swift hit the stage at the taping in mid-November with the long-legged ladies and they returned the favor by lip-synching in the video to her hit “I Knew You Were Trouble.”

The models strut their stuff throughout the video as they give everyone as behind-the-scenes look at the show.

The clip opens with a teasing quote that works perfectly with Swift’s lyrics that allegedly refer to her relationship with One Direction’s Harry Styles.

One of the models says, “You look so much like an angel when you smile. Maybe we all are angels on the inside or maybe not… “

The Angels then dance while mouthing the song, running down the long runway and even prancing with the signature angel wings.

One person who participated in the show who is not seen in the video is Australian model Jessica Hart. Hart created a fuss when she talked about Swift’s participation in the show.

The 27-year-old then backtracked a few days later to US Weekly, “I adore Taylor Swift, and I was so excited to be with her at the Victoria Secret Fashion Show. What Taylor does on stage is nothing compared to what we do. I could never get up there and do what she does! She is a true rock star and she absolutely killed it the other night.”

Rumors began to swirl around that the gorgeous gal had been fired by the company.

In a statement on Tuesday, chief marketing officer for Victoria’s Secret Edward Razek said, “There is no truth to the rumors that Jessica Hart has been fired or that she will no longer work with the brand. As you will see, she was a great part of our show and we look forward to continuing to work with her.”

With all the drama to the show, it’s just going to get more people to watch.